IMF mission warns of challenging times for the economy 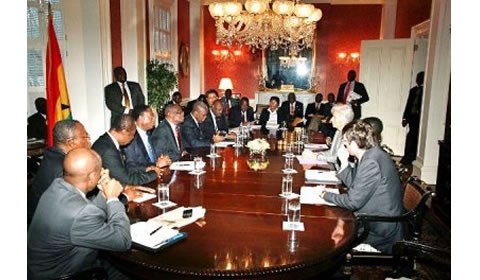 The International Monetary Fund has warned that the country is still not out of the woods yet with respect to the current economic challenges.

The Fund maintains that prices of goods and services would continue to rise in the coming months, while economic growth might suffer as well. It is therefore calling on government to quickly work to address the short term vulnerabilities.

“The weakening growth momentum and inflationary pressures are expected to continue into 2014, calling for urgent measures to address macroeconomic imbalances. In the absence of further measures, the mission sees the fiscal deficit target of 8.5 percent of GDP at risk. This, combined with a weak outlook for gold prices, would also keep the current account deficit at high levels.”

A mission from the International Monetary Fund (IMF), led by Christina Daseking, visited Accra during February 12-25, 2014, to conduct discussions for the 2014 Article IV consultation. The mission met with Vice-President Amissah-Arthur, Finance Minister Terkper, Bank of Ghana Governor Wampah, other senior officials, members of parliament, and representatives of the private sector, think tanks, and civil society.

At the end of the mission, Ms. Daseking issued the following statement:

“Ghana’s economy slowed down on the back of sizable external and fiscal imbalances and energy disruptions in the first half of the year. Based on data for the first three quarters of 2013, the mission estimates growth of 5½ percent—well below the levels of recent years.

On the fiscal side, revenue shortfalls, overruns in the wage bill, and rising interest costs pushed the 2013 deficit to 10.9 percent of GDP, versus a target of 9 percent. The overrun would have been higher in the absence of significant revenue measures, the elimination of fuel subsidies, large increases in utility prices, and compression of other expenditure.

The large fiscal deficit combined with a weaker external environment, led to a widening of the current account deficit to 13 percent of GDP and to further pressure on international reserves. The consequent weakening of the cedi together with large administered price increases contributed to inflation rising above the end-year target range to 13.5 percent.

“The weakening growth momentum and inflationary pressures are expected to continue into 2014, calling for urgent measures to address macroeconomic imbalances. In the absence of further measures, the mission sees the fiscal deficit target of 8.5 percent of GDP at risk. This, combined with a weak outlook for gold prices, would also keep the current account deficit at high levels.

“The success of the government’s ambitious transformation agenda is contingent on restoring macroeconomic stability. While welcoming measures already taken and announced in the budget, the mission stressed that additional fiscal savings are required to address short-term vulnerabilities, contain rising public debt levels, and reduce interest rates. This will be essential to stabilize the economy and support private sector development, growth, and employment creation over the medium term.

“Structural reforms to ensure lasting expenditure discipline are key to sustainable fiscal consolidation. The mission supported the authorities’ plans to regain control over the wage bill, helped by their efforts to strengthen public financial management. It suggested assessing additional options that bring predictability to wage developments and contribute to sustainable fiscal consolidation. On the revenue side, there was agreement on the need to strengthen tax administration focused on increased compliance. The mission also called for a thorough review of the tax regime, to phase out exemptions and expand the base.

“In discussions with the Bank of Ghana, the mission welcomed the tightening of the monetary policy stance to defend the inflation target. With regard to the new foreign exchange regulations, the mission agreed with the Bank of Ghana that these measures alone will not resolve the underlying pressures in the foreign exchange market. It recommended a review of the measures after an appropriate evaluation period to assess their effectiveness and mitigate any unintended consequences.

“On its return to Washington D.C., the team will prepare a staff report that is tentatively scheduled for discussion by the Executive Board in late April. The Board discussion will complete the Article IV Consultation.”