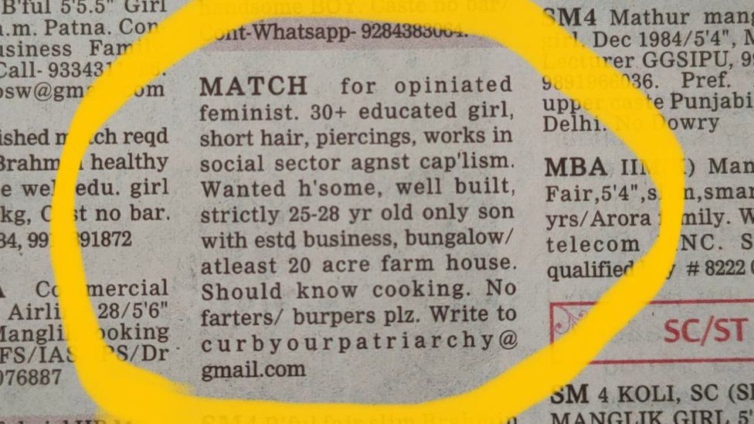 The wedding ad that has gone viral and also riled many

Matrimonial advertisements in newspapers are not where Indian feminists generally go looking for a match.

Most of them are classified according to religion and caste, they often carry details of physical attributes such as skin colour, height and shape of the face, and many boast of six-figure incomes, family wealth and properties.

So, last week when an ad seeking “a non-farting, non-burping, handsome, rich feminist” man for “an opinionated feminist with short hair and piercings” appeared in India’s largest-selling newspaper, it went viral.

Comedienne Aditi Mittal shared it on Twitter asking if someone had put it out on her behalf:

Did someone put out a matrimonial ad for me pic.twitter.com/DKsbk0iijT

Many others, including Bollywood actress Richa Chadha, responded:

Many speculated about the identity of those behind the ad and whether it was “authentic”.

It turns out it was a prank between a brother, a sister and her best friend. Using the email address posted on the ad, the BBC managed to track down the “opinionated feminist” – Sakshi – and her brother Srijan and her best friend Damyanti, who came up with the idea.

All the names are pseudonyms – they don’t want their identities revealed since, as Sakshi said, “we are all professionals with steady careers, and (hopefully) promising lives ahead of us” and don’t want to attract “bloodthirsty” social media trolls.

The ad, Srijan said, was “a small prank we played for Sakshi’s 30th birthday”.

“Turning 30 is a milestone, especially because of all the conversation in our society around marriage. As you turn 30, your family and society start putting pressure on you to get married and settle down,” he said.

Sakshi said she does have short hair and piercings, works in the social sector, is opinionated and that the burper-farter is a family joke.

The ad appeared in a dozen northern Indian cities and cost about 13,000 rupees ($175; £126) – “an amount we would have spent on presents and celebrations if there was no Covid lockdown,” Srijan said.

The night before her birthday, Sakshi said, her brother gifted her a paper scroll.

“When I unrolled it, it had the email address – curbyourpatriarchy@gmail.com – and the password. I had no idea what I was supposed to do with that,” she told me on the phone from her home. “In the morning, Srijan brought me a copy of the newspaper with the page opened to the matrimonial columns and we had a good laugh. It was a fun prank.”

But what started off as a private joke between friends was soon all over social media. Once celebrities shared the ad, hundreds began commenting on it and dozens of emails started arriving in the newly-created inbox.

“I’ve received more than 60 emails so far. Many figured it was a joke and thought it was funny,” Sakshi said.

One man wrote in saying he was her man since he was “docile and not opinionated at all”, a woman wrote in thanking her for the ad and said “I’m this person too”.

But in India, a country steeped in patriarchy where feminism is often considered a dirty word and feminists are misunderstood as men-hating, licentious women – by both men and women – the ad also triggered those who sent out rude and abusive messages.

Sakshi was called “a gold digger” and a “hypocrite” because she’s “anti-capitalist but wants a rich husband”; she was described as a “cougar” since “she is 30 plus but wants a man who’s 25-28”; and many advised her “to earn your own money”.

Some wrote in to say her ad was “toxic”, that she “sounded fat” and one said “all feminists are idiots”. One woman was so angry that she threatened that her brother would “throw her off the 78th floor”.

Damyanti pointed out that in India, where 90% of all marriages are still arranged, “everyone wants a well-settled groom. But to see it laid out clearly triggered so many people. They were enraged”.

Sakshi said the ad “seemed to have hurt a lot of egos”.

“You can’t say such things out loud. Men ask for tall, slim beautiful brides all the time, they brag about their wealth, but when the tables are turned, they can’t stomach it. How could a woman set such criteria?”

The ad, she added, “was a satirical statement on this narrative and I assume that the people getting triggered are the same as those who put out these kinds of ‘slim, fair, beautiful bride wanted’ type of ads in the first place”.

And for those “triggered by obvious satire”, she had a question: “Do you send such triggered emails to all the sexist, casteist ‘bride wanted’ adverts that appear in the papers everyday? If not, then you need to curb your patriarchy”.

DISCLAIMER: The Views, Comments, Opinions, Contributions and Statements made by Readers and Contributors on this platform do not necessarily represent the views or policy of Multimedia Group Limited.
Tags:
Feminism
India
weddings
Women In India