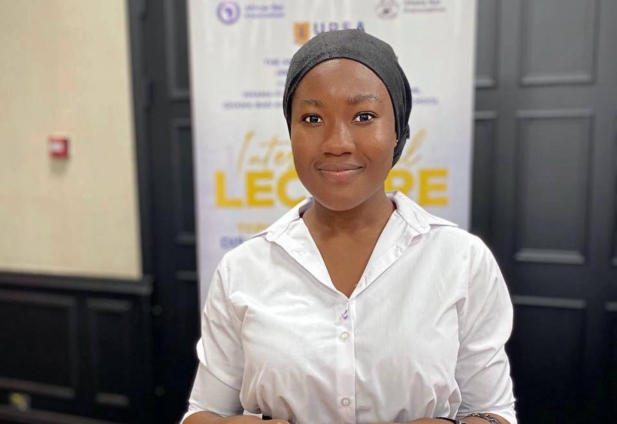 At the age of 22, Naziha Gombilla had her fair share of insecurity, self-doubt, and fear of failure.

As James Allen warns in his book “As A Man Thinketh,” Naziha Gombilla’s dreams were nearly crushed in the early stages of her career.

The first-class honours law graduate from the University for Professional Studies had no idea how she was supposed to get rid of insecurity, self-doubt, and fear.

Even when she was asked to run for the presidency of the law students, she declined because of her fears and self-doubt.

“Those were my most difficult challenges,” she admitted.

Madam Gombilla’s best action was to say, “Act is the blossom of thought.” This stayed with her every day, and she improved in every way.

Miss Gombilla felt secure, confident, and overcame her fears when she ran for Vice President of the Law Students in 2021 and won.

“Focus your mind, and your goals and dreams will come into focus as you do the things that will help you build your ideal life. It’s very exciting because it actually works.”

Madam Gombilla was too quiet and unaspiring until she conquered her fears, self-doubt, and insecurity.

She started her journey at UPS in 2018, where she enrolled in the Bachelor of Laws program.

Miss Gombilla enjoys assisting younger students in better understanding the law, which has made her name well-known at the University Law School.

Miss Gombilla broke new ground by becoming the UPSA Law School’s first Valedictorian and the first student to graduate with First Class Honours with a CGPA of 3.72.

Aside from law, Miss Gombilla says her passion has always been to be an actress and photographer, which is why she joined a drama club and represented her school in drama competitions.

She is proud of her ability to speak in public, her advocacy strength, and her retentive memory.

She aspires to be a lecturer and international energy law expert in the future.

DISCLAIMER: The Views, Comments, Opinions, Contributions and Statements made by Readers and Contributors on this platform do not necessarily represent the views or policy of Multimedia Group Limited.
Tags:
Law School
Naziha Gombilla