It is our resolve to build a system that provides timely, quality justice delivery – Chief Justice 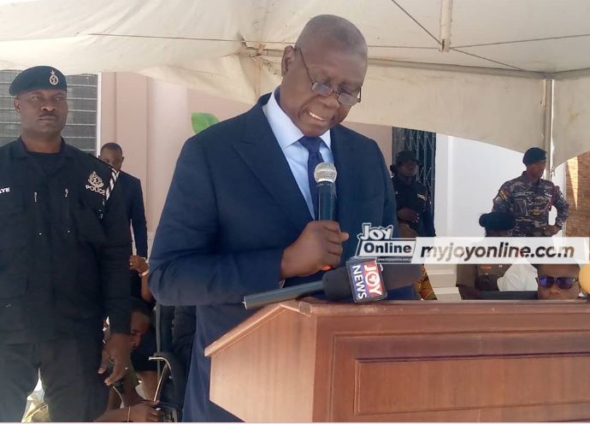 The Chief Justice of Ghana, Justice Kwasi Anin-Yeboah, has reassured litigants of his quest to build a judicial system that provides timely and quality justice delivery across the country.

The Chief Justice made this known during the inauguration of a new High Court Complex in Damongo in the Savannah Region.

According to Justice Anin-Yeboah, such a system would enable litigants easy access to justice and also cut costs and risks in traveling to far distances to access justice.

“For us in the Judiciary, we cannot, however, limit our achievements to the concrete and marble per se. It is our resolve to build a system of justice that assures litigants and Ghanaians of timely and quality justice delivery so that they do not travel far to access justice”, the Chief Justice stated.

The facility which also houses a Circuit Court is fitted with boreholes, solar power and a standby generator to ensure regular water, power supply and clean energy.

According to Chief Justice Kwasi Anin-Yeboah, the Judiciary together with the support of its development partner, UNICEF has provided the requisite facilities in the two courts designating them as “child-friendly and gender-based courts to additionally, handle cases that pertain to abuse against women, men and particularly, children.”

“The Court has been designed to provide a welcoming and friendly atmosphere for child victims and women who are traumatised as a result of domestic violence and gender-based abuse and are brought to court to testify.

“It has been purposely built to ensure that such victims have no contact with the perpetrators in the course of testifying,” he said.

While expressing gratitude to government for keeping to its promises to construct infrastructural projects such as houses and accommodation throughout the country for the judiciary, the Chief Justice also commended the Ministry of Local Government, Decentralisation and Rural Development, Parliament and Traditional rulers for the funding, approval of budget and land for the project.

On his part, the Savannah Regional Minister, Saeed Muhazu Jibril, on behalf of the chiefs and people, thanked the judiciary for extending its service to the people in the Region.

“These courts mean that the tentacles of the judiciary have been spread and will be found in the Savannah Region particularly, in the capital. The availability and access to court is of basic importance for development and I believe that it is the Local Government Act 26, Act 926, section 1238 which mandates Metropolitan, Municipal and District Assemblies (MMDAs to ensure that they have access to Court in their districts for the promotion of justice,” Mr. Saeed Jibril stated.

Meanwhile, the Damongo Magistrate Court which was constructed and furnished by former President John Agyekum Kuffour with computerised Court system has become a white elephant with its valuable documents gathering dust in the middle of the Savannah Regional capital.

JoyNews checks revealed that alleged interferences by some politicians, local chiefs and opinion leaders influenced cases meant for the Court to be dropped mostly at the Police stations, hence making it difficult for the Court to function as expected leading to its subsequent closure in the year 2011 and counting.

DISCLAIMER: The Views, Comments, Opinions, Contributions and Statements made by Readers and Contributors on this platform do not necessarily represent the views or policy of Multimedia Group Limited.
Tags:
Chief Justice Kwasi Anin-Yeboah
Justice