'It was an honour to compete against a player like you' - Real Madrid to Aguero - MyJoyOnline.com 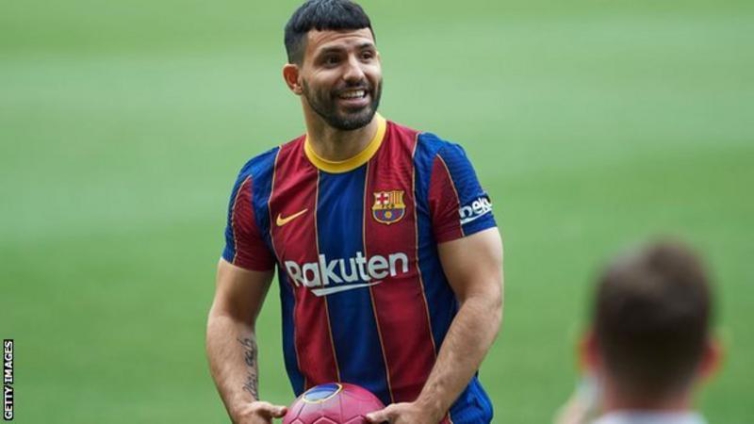 Real Madrid say it has always been an honour coming up against Sergio Kun Augero in the La Liga.

According to the club, Aguero is “one of the best players in the world” and since they shan’t meet in the future, the club wishes the “Best of luck to you and your family.”

This heartwarming message comes as a reaction to the player’s retirement.

It was an honour to compete against a player like you, @aguerosergiokun, one of the best players in the world. Best of luck to you and your family.

The 33-year-old who played for Manchester City, today, Wednesday announced his retirement at Barcelona.

While sobbing, he told his many fans that he has to take a bow due to matters relating to his health.

“This conference is to communicate that I have decided to stop playing football. It’s a very difficult moment.

“When they did the first physical test on me in the clinic, the medical staff called me to tell me there was a very big possibility that I wouldn’t be able to keep playing. From that point I was processing it all but it wasn’t easy. One of the doctors told me straight up, ‘that’s enough’,” he said as communicated by BBC.

Aguero was taken to the hospital on October 30, after experiencing “chest discomfort” during a 1-1 draw with Alaves.

According to the former Man City striker, he did all he could to fight this battle because it has always been his dream to be on the field.

Even though he has to retire at the age of 33 years, Sergio Aguero says he is proud of himself for all he has accomplished.

“I want to tell everyone that I did everything possible. I dreamt about playing football since I was five years old and I first touched a ball. I never thought I would get to Europe, so I want to show my gratitude to everyone regardless of where I trained.

“I’m proud of the career I’ve had and I am fortunate it is happening to me now rather than before. I don’t know what awaits me in the next life but I know there are a lot of people who love me and want the best for me.”

Also, many across the world have taken to social media to celebrate the great player. Kevin De Bruyne, John Terry, Alan Shearer are among those that have wished Aguero well as he retires.

It is not surprising since Aguero is the fourth-highest scoring player in Premier League history with 184 goals in 275 games, behind only Alan Shearer (260), Wayne Rooney (208) and Andrew Cole (187).

He is also the league’s highest-scoring overseas player, having registered nine more goals than Thierry Henry (175), according to BBC’s stats on the player.

Bowing out like the true goalscoring king he was 👑 pic.twitter.com/uzRxcdoPJt

One Of The Greatest @premierleague players EVER. @aguerosergiokun 💙
LEGEND pic.twitter.com/8yWo7H43l7

😢 It’s always heartbreaking to see a Legend hang up their boots, but nothing matters more than a person’s wellbeing.

💛 Hence, we at #CadizCF extend our warm wishes to Sergio Aguero for his future endeavours in life that shall be filled with health, prosperity and happiness. pic.twitter.com/1oXhtHh0fX

One of the best strikers ever! Want to wish you all the best for the future legend. See you soon @aguerosergiokun pic.twitter.com/DLsZ2aL6jg