'It was his game, he could be Divock Origi - Klopp full of praise for 'top striker' after another last-gasp goal - MyJoyOnline.com

‘It was his game, he could be Divock Origi – Klopp full of praise for ‘top striker’ after another last-gasp goal 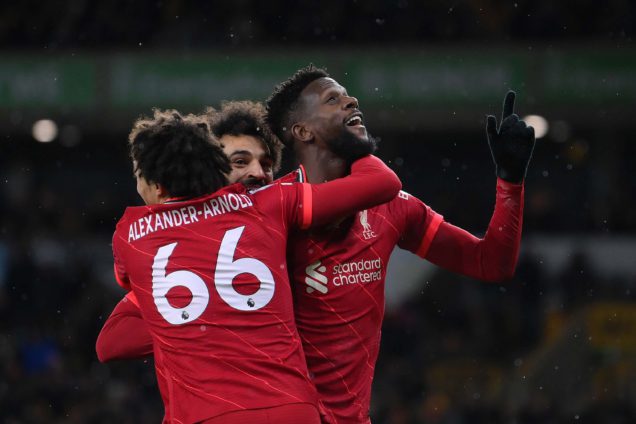 Liverpool striker Divock Origi praised his side’s never-say-die attitude after helping them clinch victory over Wolves with a last-gasp strike on Saturday.

The forward came off the bench to score the only goal of the game at Molineux Stadium, finally breaking the hosts’ stubborn resistance.

Victory put the Reds briefly top of the Premier League after rivals Chelsea were defeated by West Ham, though Manchester City’s win later in the evening sent Pep Guardiola’s side past them.

“I think that ties in with the values of the club – keep believing, keep going,” Origi told Liverpool’s official website after the game.

“In the end you can only control the moment you are in and just try to make the right play every time again, even if you fail again and again.

Manager Jurgen Klopp was also delighted to see his supersub come through again for the team.

“He is an incredible finisher and if we don’t know it at Liverpool then who should know it. It is difficult to get 500 minutes a week in the team we have,” he said to reporters.

“He doesn’t need a lot of run-up. It was his game, he could be Divock Origi. He was unlucky with the ball before. This kind of goals we see plenty of times, in training. Winning in the 95th minute is great but Div scores it is even better.”

Klopp continued: “Top striker, top boy. That is how it is. He has scored some of the most important goals in the history of this club.”

Saturday’s victory extended Liverpool’s winning streak to four games in the Premier League, while only West Ham have managed to get the better of Jurgen Klopp’s men in any competition so far in 2021-22.

With the Hammers also beating Chelsea 3-2 at the weekend, the Reds leapfrogged the Londoners to go one point clear of the Blues.