'I've written to the Speaker with modifications to the 2022 Budget' - Ken Ofori-Atta - MyJoyOnline.com 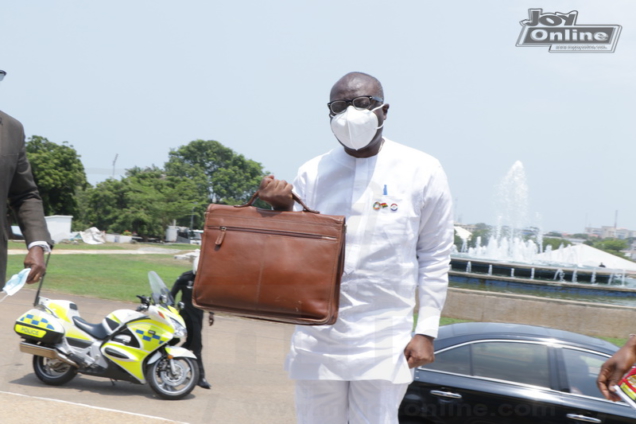 Finance Minister, Ken Ofori-Atta says he has officially submitted a letter to the Speaker of Parliament, Alban Bagbin on modifications made to the 2022 Budget.

Addressing a press conference on Monday, Mr Ofori-Atta stated that revisions have been made to portions of the fiscal policy, following concerns that have been raised by the public and the Minority Caucus in Parliament.

He said paragraphs 442 and 443 of the Budget statement, which relate to the ‘Agyapa’ Royalties Transaction, will be amended.

Members of the Minority cited the inclusion of the ‘Agyapa’ and GNPC-Aker Energy deals in the budget as one of their reasons for rejecting the economic policy on Friday, November 26, 2021.

But according to the Finance Minister, references made to the ‘Agyapa’ deal in the Budget were solely for information purposes.

“On the behalf of the President, I have written to the Rt. Honourable Speaker of Parliament with details of modifications in response to emerging concerns by all stakeholders including the Minority Caucus.

“With regards to ‘Agyapa’ Royalties Limited, we shall amend paragraphs 442 and 443 to take out reference to Mineral Royalties collateralisation. It’s important to note that any reference to ‘Agyapa’ was for information purpose and as such, was not reflected in the fiscal framework of the budget,” he revealed.

He further added that paragraph 829 of the budget will equally be amended to cater for concerns that have come up over the Aker Energy and AGM Petroleum by the GNPC.

According to him, this is in line with a resolution Parliament made on July 6, 2021 that “the terms and conditions of the loan for the acquisition of the shares shall be brought to Parliament for consideration pursuant to article 181 of the Constitution.”

“We will work with the relevant Committees of Parliament to reflect these modifications in the 2022 Budget as is the usual practice, before the Appropriation Bill is passed.”

“Any other concerns which may emerge shall be addressed during the discussions of the estimates by the Committees, as has been the tradition,” he added.

The Minority in Parliament rejected the budget statement presented by the Finance Minister on Friday, November 26.

After a head-count which saw all Minority MPs on their feet in opposition to a motion for the Finance Minister to have a further engagement with the leadership of Parliament, the Speaker ruled that the budget had been rejected.

“The No’s have it. The motion is accordingly lost,” Alban Bagbin declared after the headcount.

Prior to the vote, the Finance Minister had appealed to the Speaker to allow him to further engage the leadership of Parliament over the budget.

But the appeal was turned down by the MPs through a voice note.

Speaker Alban Bagbin subjected the approval of the budget to a voice vote and the Minority had their way.

Since the presentation of the budget by the Finance Minister on November 17, 2021, the NDC MPs have vowed to kick against it.

They have said that the approval of the budget will impose further hardship on Ghanaians.