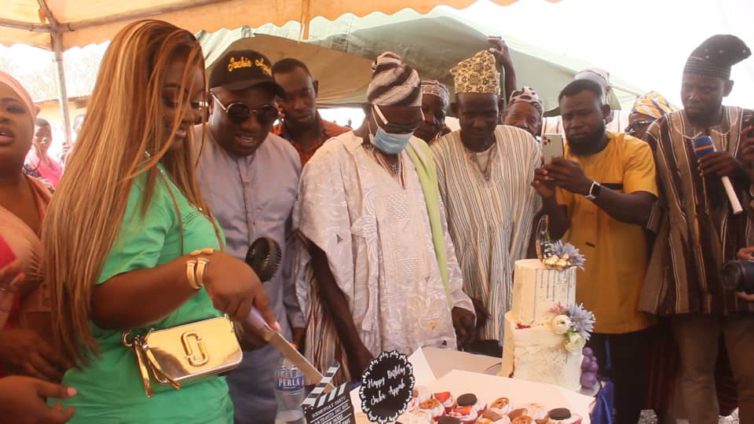 Actress Jackie Appiah has celebrated her birthday with residents of Kogni community in the Sagnarigu Municipality of the Northern Region.

As part of activities to mark the day, Jackie Appiah commissioned a mechanised borehole funded by Jacky Foundation for the residents.

This support comes at a time the community is in dire need of potable water. Children and women in the community have had to travel several kilometers in search of water, especially during the dry season.

This affected the attendants of students to school and its replications on performance and sometimes dropout.

The supply of water, community members believe has solved an enormous challenge facing the area.

Jackie Appiah also donated food items, clothes, mattresses, toiletries and among others to Kogni M/A primary school and the community.  The celebration started with a ceremonial football match between students of Kogni M/A Primary School.

Speaking to the media she said having heard of the challenges the lack of potable water posed in the community she was touched hence her decision to construct the mechanized borehole to present on her special day.

She said many residents commute several kilometers each day just to draw water so as a team they thought offering support will go a long way in addressing the challenge.

“We all know that water is life and I was told that there was no water in this community, so I and my team sat down and said decide to do a borehole for the community,” she said

Jackie Appiah said she had no special reason coming up north to offer support to the community adding that it could be any other community in the Western Region or the Ashanti Region.

”It’s just that God that touched my heart to come to the north Tamale to be precise it wasn’t any particular reason I was told that they didn’t have water in this particular community,” the actress added.

Assemblymember for Yilo Naa Yili electoral area, Osman J. Alfred overwhelmed by her support said if there is any wealthy woman in Ghana or in Tamale today, it is Ms Appiah.

“If there is any wealthy Man in Ghana or in Tamale, that person is Ms Jakie Appiah luke 12:15 say that Man’s wealth is not consistent with what he has but what he does for his society,  Ms Jakie Appiah the people of Kogni and for that matter the chiefs wants to recognize you and call you the wealthiest woman in Ghana,” he said.