Jacob Zuma calls on striking miners to return to work 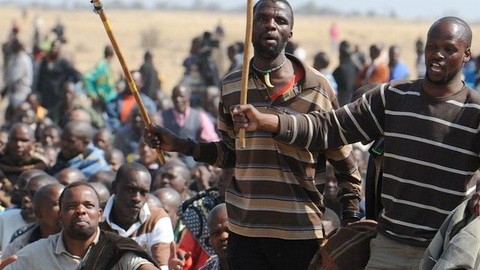 South African President Jacob Zuma has called on workers to return to their jobs after a series of violent strikes.

South African mining has been hit by a wave of wildcat strikes in which miners and officials have been killed.

Amplat is the world’s biggest platinum producer. And 15,000 miners at Gold Fields, the world’s fourth-largest gold miner, face the sack if they do not return to work by 14:00 local time on Thursday.

“We are agreed that violence and intimidation must come to an end. These have no role in our system and simply have a negative effect,” Mr Zuma added.

He also called on executives to freeze salaries and bonuses for the next year as a “strong commitment to build an equitable economy” and to address income inequality.

“The parties make a call on CEOs and executive directors in the private sector and senior executives in the public sector to agree to a freeze in increases in salary and bonuses over the next 12 months, as a strong signal of a commitment to build an equitable economy,” Mr Zuma said. “They call for an informed national conversation on income inequalities and how best to address them.”

The comments are the first significant intervention by Mr Zuma since the unrest began.

“In fact if you look at the so-called Gini coefficient [a measure of income inequality] South Africa’s income distribution is of the worst in the world,” he told the BBC’s Focus on Africa programme.

He said at least 25% of South Africans were unemployed – and as much as 40% by some definitions.

“The executives are very well remunerated… and then low-level workers are quite often paid a fraction of what their bosses get.”
Dire living conditions

The striking miners received global attention when police killed 34 striking workers at the Lonmin platinum mine in Marikana in August.

Mr Zuma has set up a judicial commission of inquiry into the killings at the Marikana mine.

The investigation will determine the roles played by the police, the management of the platinum mine, Lonmin, the unions and government.

The governing African National Congress (ANC) party is holding a leadership contest in December, and some members are already calling for Mr Zuma to be replaced by his deputy, Kgalema Motlanthe.

“We have developed measures dealing with… the living conditions of mining communities,” he said.

Thousands of people live in slums around mines with no electricity, running water or sanitation.

Many of the mining firms in South Africa are UK listed. In all, analysts say that about 75,000 miners are currently on strike in the gold and platinum sectors, most of them illegally.