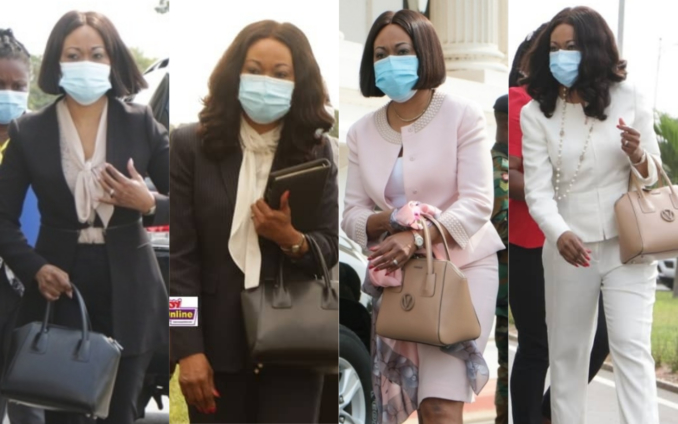 Though Jean Mensa will not be mounting the witness box, she has not failed to mount the invisible red carpets of the Supreme Court, this time with witnesses she may be open to seconding.

And from the perspective of the fashion police, she did not take any prisoners as she cat-walked the corridors of the Apex court like it were runways of Milan.

Am I the only one that thinks Mrs. Jean Mensa is using the court hearings to make a fashion statement. Each day she de “slay” differently. #ElectionPetition I always look forward to her dressing. Hope she “slays” in the witness box as well

The NDC’s ongoing 2020 election petition has got most Ghanaians interested in the proceedings.

Amidst the high stakes, one cannot fail to notice the fashionable attires worn by the EC boss at each hearing.

Since the proceedings began, the Apex Court has sat on 16 occasions.

Every adjournment presented an opportunity to switch the style up to the admiration of many who were interested in a little more than just legal arguments and objections.

It is believed that fashion is related historically to an individual’s disposition of who they are; it gives onlookers a general idea of what the person represents and what they can bring to the table.

Furthermore, it’s primary component, that is, clothes also helps in expressing the innermost thoughts, feelings and elevates mood swings according to the comfort the clothes gives.

Therefore, if the sensitive nature of the former IEA boss’ role in Ghana’s politics is anything to go by, it is only fair that she replicates that finesses in her sense of fashion.

Here are some of Jean Mensa’s memorable looks during the election petition thus far.

On Thursday, January 28, Jean Mensa was seen in a black work office pants and jacket. She spiced it up with a touch of white scarf in a classic knot style.

The EC boss on Friday, January 29, arrived at the Apex Court in a gorgeous skirt suit.

Jean Mensa stepped out on Monday, February 1, in an all-white skirt suit.

That was the day NDC’s General Secretary, Johnson Asiedu Nketia gave his famous testimony in favour of Mahama’s. Was her choice of colour intentional? Your guess is as good as mine.

Jean looked glamorous in her all-white pantsuit on Tuesday, February 2.

She carried a Valentino Minimi leather hand bag matching it with an open toe stiletto heels. This time, finishing with a silver necklace.

She carried a black tote leather bag with a matching pointy-toe heel.

The stylist woman was in a beautiful white and black button up suit jacket. She finished it up with a golden necklace.

Jean chose a monochrome look when she stepped out on Tuesday, February 9.

She wore a light pink ‘wear to work’ jacket and a skirt. She held her Valentino Minimi leather hand bag matching it with a nude pointy-toe office pumps.

For the 13th day at court, the former IEA boss wore a flowery pencil skirt suit and paired with a nude stiletto heels.

Put a blazer on it

On Monday, February 15, Jean looked elegant in a blue H&M blazer on a white office dress.

She paired her black tote bag with a stiletto heels.

Jean made a fashion statement on Tuesday, February 17, when she chose to wear a classic black blazer on her crop trousers.

For the many in both government and opposition – the manner in which the Commission executed the 2020 polls may continue to be in contention.

However, one thing is certain. The Commissioner does not shoot to miss when it comes to style as she laid it bare as evidence before the over 30 million-member panel of Ghanaian judges watching the Supreme Court in the comfort of their homes.

If the petition hearing was a season on Tyra Bank’s TV show, Jean Mensa would still be in the running towards becoming America’s Next Top Model.