Joel Bortey: What the stats say about Black Stars’ performance at 2022 World Cup 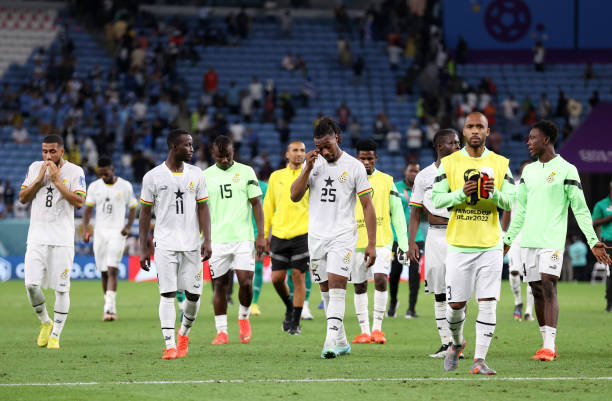 Ghana, who were ranked 61st on the 2022 FIFA Men’s rankings for October, assembled their best players for the Mundial. Unfortunately, the Black Stars took an early exit from the competition after three group games. This article looks at Ghana’s performance at the World Cup data-wise.

Amongst all 32 teams that qualified for the World Cup, Ghana exited the competition by conceding 7 goals out of an xG (expected goal) of 5.6. Only Serbia and Costa Rica conceded more in the group stage. To shed light on this, Otto Addo’s men conceded an average of 2.3 goals per match just like Qatar and Iran, ranking the Black Stars 27th out of 32. This is the most the Black Stars have ever conceded at the World Cup since making their debut in 2006.
Ghana’s number 1, Lawrence Ati Zigi faced 42 shots, averaging 11.92 shots per game. The Ghanaian was facing +2.77 shots higher than the competition’s average of 9.15.
Interestingly, 22 of those shots came in the game against South Korea. In the entire 2022 year, this is the most the Black Stars have faced from any opponent. They also did not keep a single clean sheet in the competition, a record that has been there since their first group game against Serbia in 2010 where they won 1-0.

One major player in our backline was Ati Zigi, the St. Gallen goalkeeper. The 26-year-old made 10 crucial saves in the competition, averaging 3.3 saves per game, ranking him 9th in the competition. Per FIFA data, he prevented the most goals (44) against Ghana. The Black Stars had just one error leading to a goal, and that was Portugal’s second goal, with the error credited to Baba Rahman.

Baba Rahman struggled defensively at some points. On 6 different occasions, he failed in attempting to gain possession of a ball from an opponent. Thomas Partey and Inaki Williams followed closely with 5 failed attempts.

It’s impossible to see how Ghana was going to win a game without scoring more goals to save themselves the embarrassment. The only positive they had on the stat sheet was clearances per game, averaging 27.0. They ranked Ghana first at the end of the group stages.

Otto Addo’s style of play was seen as “fast and more direct”. No surprise that Ghana averaged 41% possession ranking them 25th out of 32 nations.

Ball retention is a big part of the modern game and any team that is poor at it cannot compete at the highest level. Otto Addo’s men had 344 ball losses, with Baba Rahman accounting for 32 of them. To add to Ghana’s defensive horror show, it comes as no surprise that teams exploited us aerially. Out of 120 aerial duels contested, the Black Stars won just 39.2%. They were ranked 31st out of 32 teams, just 0.3 away from the worst team aerially, Croatia. It is worth applauding that Alidu Seidu, who is 1.73m tall, and is Ghana’s second shortest defender, won 100% of his aerial duels.

Ghana was very physical in their play and it’s no surprise they had 8 yellow cards in three games. The third most in Qatar. Only Saudi Arabia (14) and Serbia (12) had more. The good news? No Black Stars player was sent off.

With an improvement in attacking talent, the Black Stars scored 5 goals. Joint-highest by an African team in Qatar. At the ongoing 2022 FIFA World Cup, Ghana was actually the first African nation to score in round 1, after failed attempts from Cameroon, Senegal, Tunisia and Morocco. While the others struggled to get a goal, Ghana got two goals against Portugal but lost 3-2. Otto Addo’s men broke Ghana’s record of goals scored in a single World Cup edition (5). The highest Ghana had ever scored in the group stage was 4 in 2006 and 2014. With 26 shots attempted on goal, the Ghanaians averaged 3.3 shots on target per match, ranking them 17th at the end of the group stage.

Attempting a total of 37 crosses, Abdul Baba Rahman accounted for the most (10). All his crosses came from the left flank and only one out of the 10 was from the six-yard box. Interestingly, he completed just 3/10 (30%).

In terms of touches in the penalty area, Ghana was just not good enough. 25 touches in total, ranking us the third least in the competition behind Qatar (19) and Costa Rica (13).

Did Ghana attempt any through passes? Yes, just 11, the third lowest in the competition behind South Korea (9) and Australia (4), both qualified to the knockout phase of the competition. The Black Stars also made a total of just three key passes. Only Ecuador and Costa Rica had less (2).

Inaki Williams led Ghana’s attack as a striker but had just 2 shots in 2 games. One against Portugal and the other coming against South Korea. None were on target, giving him a shot accuracy of 0%.

Here is a list of players that stood out in attack:

Otto Addo has officially stepped down as head coach of the Black Stars. In his 9 months in charge, he’s coached 12 games, won 4, drawn 4 and lost 4. His win rate of 33.3% ranks him as the worst amongst Ghana’s last three coaches (Charles Kwablan Akonnor and Milovan Rajevac). Otto Addo’s side has also conceded 16 goals while scoring 14 within the same time frame.

DISCLAIMER: The Views, Comments, Opinions, Contributions and Statements made by Readers and Contributors on this platform do not necessarily represent the views or policy of Multimedia Group Limited.
Tags:
2022 FIFA World Cup
Black Stars