Joke Silva opens up on how Olu Jacobs wooed her, arrived late at their wedding 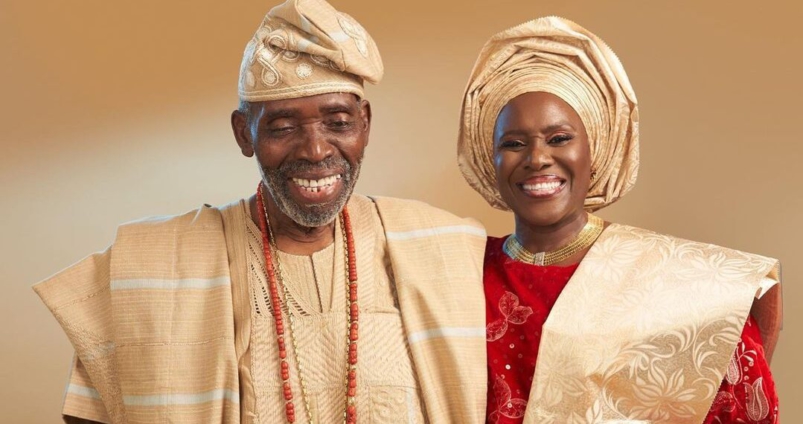 The story has been told of how charismatic actor Olu Jacobs arrived late to his wedding, but his wife, actress Joke Silva, has shared more information.

The 60-year-old actress opened up on their love story in a documentary on her husband’s life and career produced by Femi Odugbemi.

She detailed how they met on a production set and the journey to their love affair.

“It was just before the celebration of Nigeria’s 21st anniversary. Ms Edith Enem was the artistic director of the National Theatre at the time, and they wanted to put up a production of ‘Jero’s Metamorphosis’,” she recalled.

According to her, the set was abuzz with this man. who was coming from England, called Olu Jacobs and was going to play the lead character, Jero.

She recalled that with the excitement they spoke about him, she looked forward to meeting him.

She said that “we were in rehearsals one day at the main bowl…and I was told to go call Ms Enem to come and take a look at what we had rehearsed. As I opened the curtain, I just heard this incredible voice that went ‘Wow! This is the standard of the woman I’m going to marry’. I’m like what kind of standard line is that, and I looked him up and down and, I thought it, what rubbish.”

However, when he came over for rehearsals, Joke Silva said he a wonderful person to work with.

She noted that “he realised he had made a faux pas and tried to get in my good graces after that. We became excellent friends.”

That was the beginning of what has led to 37 years of blissful marriage.

She also recalled how Olu Jacobs was nowhere to be found on their wedding morning.

“When he eventually came, he apologised profusely and explained why he was absent. He said well, they partied into the early hours of the day,” Joke Silva noted.

“They all fell asleep, and the people who were supposed to wake him up at 9:30 woke up just when the service began at 10. He woke up at 9:30 am. And started screaming and waking everybody up,” she said.

Meanwhile, once in an interview, Olu Jacobs explained why his wife still bears her maiden name, Silva.

“She is her individual. When I met her, she was an actress known as Joke Silva, so why should marrying me deny her audience her name. She is Miss Joke Silva, who is Mrs Joke Jacobs. It is as simple as that,” he explained.

He added that “people now begin to say all sorts. They have even written that we are separated and all sorts of stuff. When she is working, she is Joke Silva, but she is Mrs Joke Jacobs at home.”

DISCLAIMER: The Views, Comments, Opinions, Contributions and Statements made by Readers and Contributors on this platform do not necessarily represent the views or policy of Multimedia Group Limited.
Tags:
Joke Silva
Olu Jacobs