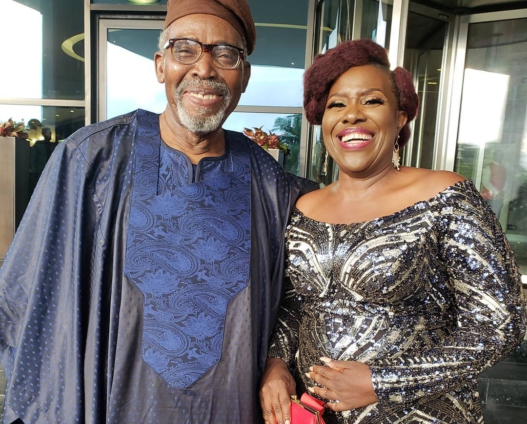 In honour of stage and film legend Olu Jacobs’ 80th birthday, the President of Nigeria, Major General Muhammadu Buhari joined Nollywood actors from both Nigeria and overseas to celebrate the thespian.

President Buhari joined Nollywood in congratulating Olu Jacobs on turning 80 in a statement released on Sunday and signed by his Special Adviser on Media and Publicity.

The statement read “The President felicitates with the Jacobs’ family, including the wife, also a renowned thespian, Joke Silva, and their friends on the auspicious occasion, which calls for thanksgiving for God’s care, guidance and protection.”

It continued, “President Buhari affirms the influence of the veteran actor on the film industry, setting a standard of professionalism that has attracted global recognition and awards, like the Lifetime Achievement Award conferred on him in 2016 by African Movie Academy Awards.”

As the actor approaches 80, the President remarked on Jacob’s brilliant capacity to transform characters, demystify complex issues, and make messages understandable to both young and old, breaking down barriers of culture, ethnicity, and religion to become a household name throughout the nation and beyond.

President Buhari feels Olu Jacobs’ inherent inclination to advise, inspire, and instruct readily gained him the roles, while complimenting his vision in luring people into the industry and assisting them in becoming celebrities. Olu Jacobs is largely characterised as a father and voice of wisdom in most movies.

In order to better serve the arts, God, and humanity, the President prayed to the Almighty God for improved health, a longer life, and steadfastness.

DISCLAIMER: The Views, Comments, Opinions, Contributions and Statements made by Readers and Contributors on this platform do not necessarily represent the views or policy of Multimedia Group Limited.
Tags:
Joke Silva
Olu Jacobs
President Buhari