Journalists urged to work together on Election Day for safety 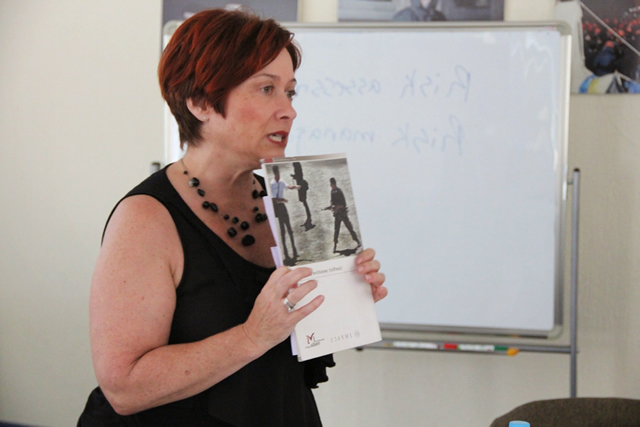 Journalists billed to cover this year's elections for various media house are being advised to work as a team for their own safety.

Advisor at International Media Support Michelle Betz made the call at a Workshop organized by the Media Foundation for West Africa for News Editors and Senior Journalists on safety for journalists during the elections.

She said the elections are bigger than any individual media house's competitive interest and the need to get it the facts right and ensure the safety of reporters should take preeminence over all other interests.

"Getting it right goes a long way to ensure your safety because politicians will find it difficult to single you out for criticism and attack," she said.

Participants noted that media owners are usually preoccupied with getting audience they can sell to advertisers for revenue, but Betz said the journalist have to think of their individual safety while covering the election.

"No story is worth more than your life – no breaking story is worth dying for so you as journalists must work together at the individual level while you are in the field," she said.

Michelle Betz thinks the two weeks period needed to cover the period just before, during and after the elections are not too much to sacrifice competition and work together just to get it right and be safe while covering the process.

Participants observed that journalists working for international organizations like BBC, CNN, Sky News, Aljazeera and others, usually collaborate with each other in fact checking issues before publishing during the coverage of sensitive events like elections, so there nothing wrong with local journalists doing same.

Head of Media Studies at Wisconson University, Prof. Kwame Karikari noted that a study by the MFWA on violation of press freedom in West Africa shows that Ghana is the worst offender of journalists rights this year.

He said between January and now, 25 cases of attacks on journalists have been recorded in all West African countries, out of which Ghana tops with seven cases, representing 28% of the total.

Prof. Karikari noted that the most worrying part is that out of the seven cases recorded in Ghana, six are violation committed by members of the security services, mainly the police.

He said this is an indication that journalists cannot even count on the police for safety in the course of their duty and that is a worrying trend.

Prof. Karikari therefore emphasized the need for journalists and journalist associations to work together and find a way of using their numbers to create a safe haven for themselves while covering the elections.

He also urged the police and other security agencies to rid itself of the bad record and assure journalists and the public of their commitment to protect democracy, including press freedom.

Journalists attending the workshop observed that the owners of their various media houses will not settle for the collaboration idea once that will not give them that competitive urge.

They also noted that journalists and media houses are their own enemies because when one journalist suffers, their own colleagues and even associations do not come to their aid; indeed some media houses even do report that the journalist/media house deserved to be violated.