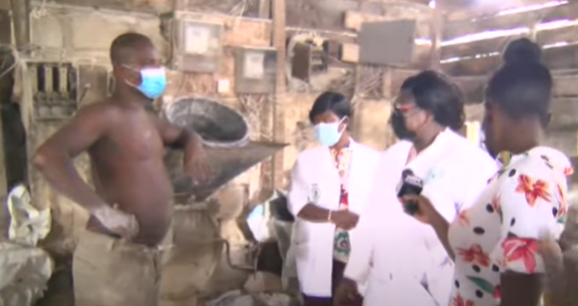 The Environmental Health Directorate at the Accra Metropolitan Assembly (AMA) has locked up a corn mill facility operating under unhygienic conditions in the Ablekuma South Constituency.

This according to them is part of efforts to maintain a clean city. Several other items were seized from some other food vendors and a public toilet operator.

The scene at the corn mill was characterized by filthy drains, exposed wires and rusty machines.

Environmental Health Director, Florence Kuukyi, who led the team explained that the operator of the mill was putting his workers and surrounding residents at risk of fire outbreaks because the building was made of wood.

“We always advise you to use floor coverings that are washable but you don’t adhere to these instructions. There are naked wires hanging everywhere. Is it good? This is not the first time we have been here to warn you on these things, but you have made up your mind to go contrary to the rules, in that case, we will help you, we are locking up this place right now.”

The team also visited a “kenkey house” which was also operating under bad conditions. Corn dough stored in large basins, had dirty coverings. While disappointed officials complained, the vendors were busy putting up a defense.

“When you check the dough you would see that there’s growth of maggots on it because that is where it is placed and every day they pick some, cook and they leave it there”

The Environmental Health Directorate also made a stop at a public toilet facility.

Although the AMA had earlier organised training sessions for public toilet operators, owners of this facility were operating contrary to what they had been taught.

They still sold cigarette sticks, and administered newspapers for use as tissue paper. In an interaction with the facility operator, Madam Florence Kuukyi asked why he refused to obey the rules.

“Do you know that we had a meeting and called all of you to come. And we said you should stop selling this paper for people to use as toilet papers, do you remember? Then why are you still doing it? Is it because you decided not to do the right thing?

The operator, however, could not defend himself. In all, three facilities were inspected with one getting locked up.

DISCLAIMER: The Views, Comments, Opinions, Contributions and Statements made by Readers and Contributors on this platform do not necessarily represent the views or policy of Multimedia Group Limited.
Tags:
Ablekuma South Constituency
Accra Metropolitan Assembly (AMA)
Environmental Health Directorate