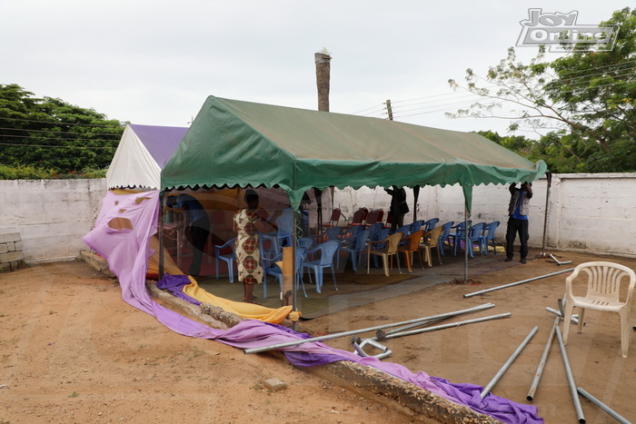 The Accra Metro Environmental Health Inspectors on Wednesday, July 13, 2022, stopped a church activity which was going on in a house at Zoti near Korlebu Teaching Hospital in Accra.

This was part of measures to reduce excessive domestic noise pollution in the metropolis.

There was a prayer session going on when the environmental officers and AMA taskforce arrived on the premises.

After a brief conversation between the AMA Metro Health Director, Madam Florence Kuukyi and the Founder of the fellowship, she ordered the taskforce to dismantle the tent under which the prayer session was taking place.

The landlord of the house, Mr Owusu Kyere Akoto, who doubles as a member of the fellowship challenged the officers for their actions. According to him, worshiping in the house does not go against the law.

But Madam Florence Kuukyi disagreed with him. She said the landlord has altered the building permit covering the house by holding church activities to disturb tenants in the house.

She said holding church activity in the house was not part of the original permit he holds and therefore cannot continue.

Mr Owusu Kyere Akoto was handed a summon to report to the Accra Metropolitan Assembly’s office.

The team moved to Kamara, a community in Mamprobi to sensitize residents on environmental cleanliness. They saw a heap of refuse in front of a house which is in contravention of the new environmental policy- Operation Clean Your Frontage.

After some minutes of knocking on the doors of the house, a certain lady who came to talk to the officers said she was waiting for the refuse to properly dry to enable her burn them. But her explanation was rejected by Madam Kuukyi because open burning is also against the AMA byelaws so she was given two hours to clear the refuse and served with notice.

The team also locked a bread bakery factory in another house said to be operating in an unhygienic environment as the team uncovered a bucket of feaces that was allegedly placed there by a tenant.

It was later established that the house did not have enough toilet facilities to serve tenants and therefore notices were given to some of them.