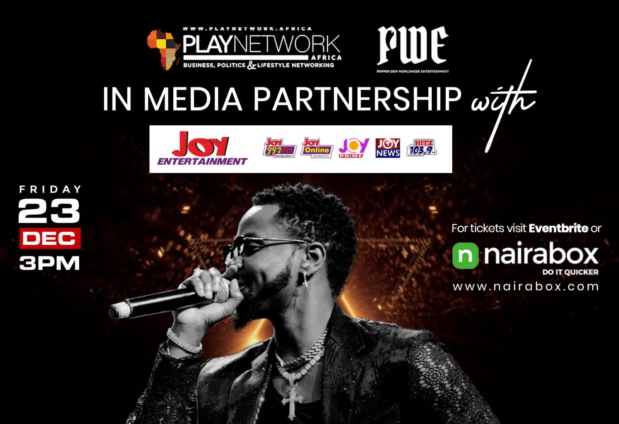 It’s official, Nigeria’s music star Kizz Daniel will be live in concert in Ghana this December.

Ahead of that, Joy FM, has been announced as official media partners for the thrilling event on December 23, at the Untamed Empire in Ghana. The event will be powered by Joy Entertainment.

The announcement of the Kizz Daniel Concert is yet another of many fruitful media partnerships by Joy Entertainment this year with some giant companies, including the Global Citizen Festival held in September. “We are excited about this partnership”, Edem added.

Pepperdem Worldwide Entertainment is known for curating mind-blowing experiences for music fans. Its CEO, Sola Omotola, who expressed his love for the works of talented Kizz Daniel over the years, revealed that the decision to stage a concert with the ‘Buga’ hit-maker as the headliner, occurred to him suddenly in Namibia after a Burna Boy concert.

The decision to hold it in Accra was accepted and confirmed after series of consultations. “Everybody we have talked to since then has been in on it… we are very excited to work with Multimedia, Joy FM. Edem, thank you so much for bringing us on board”, Sola disclosed.

Chidi, Vice President of Pepperdem Worldwide Entertainment said of the concert, “there could have been no better place for Kizz Daniel and this is his first time ever in Ghana, so this is huge…and we just want to have a good time”.

The partnership between the two entities means, all information prior and during the event are exclusive to Joy FM. It further confirms that listeners and fans in Ghana can get news and information only on all Joy Entertainment platforms; Joy FM, Joy Prime, Hitz FM and its dedicated social media handles.

The Kizz Daniel in Ghana Concert happens on December 23 at the Untamed Empire Event Garden on the Spintex Road in Accra. Tickets can be purchased online via Eventbrite and Nairabox.

More details to follow soon. Joy Entertainment, we are large and in charge.

DISCLAIMER: The Views, Comments, Opinions, Contributions and Statements made by Readers and Contributors on this platform do not necessarily represent the views or policy of Multimedia Group Limited.
Tags:
December in Ghana
Joy FM
Kizz Daniel