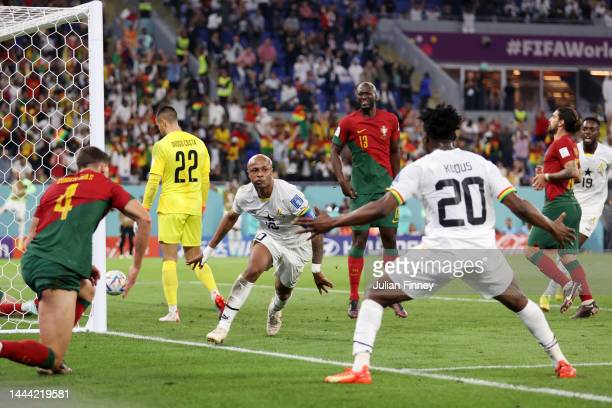 Some audiences of Joy FM have been sharing their thoughts after the Black Stars’ 3-2 loss at the opening Portugal game at the 2022 World Cup.

A listener of the Super Morning Show, Yeboah, says he was saddened by what he sees as unprofessionalism the Black Stars demonstrated during the field of play.

Speaking on Joy SMS, Yeboah recalled that since he began to follow football, he had never seen a team celebrate after a goal although they were behind.

“Why did Dede even jubilate when he scored that goal, it’s as if we are okay and when he was going off the bench he was still celebrating. So the whole team does not have focus. On the field of play, we lose focus. Look, I am yet to see a football team do this,” he told host, Kojo Yankson on Friday

“When we start a match and you score the first goal you take the ball to the centre, do you know what it does to the other team physiologically? Look at the second guy too.”

He criticised Ghanaians for hailing the team despite their performance he believes to be below par.

He believed the team could have done better than they did.

“That is our [Ghanaian] problem – mediocrity. When they [the Black Stars] do something you always say it’s good and that he has done well. Why can’t we score Portugal and challenge the status quo for once in everything we do,” he pointed out.

In his view, the country had invested so much money and was expecting the best.

Other listeners, however, disagreed with Yeboah’s assertion.

For Peter, he could not believe the performance of the Blackstar and was full of praise for the coach Otto Addo.

“You see Portugal is not a small team and what Otto Addo had done yesterday for me, I don’t even believe it. I trust Black Star but I didn’t believe they could perform like they did yesterday. Otto Addo has tried,” he said.

Another listener, Jeffery said the team’s performance was great but for a few hitches.

“Otto Addo also made a sight mistake by changing Dede and Kudus just after scoring a goal,” he said.

DISCLAIMER: The Views, Comments, Opinions, Contributions and Statements made by Readers and Contributors on this platform do not necessarily represent the views or policy of Multimedia Group Limited.
Tags:
Black Stars
Joy FM listeners