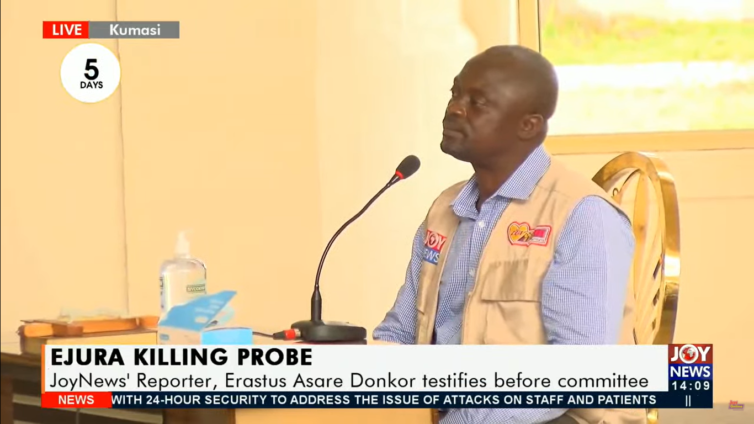 JoyNews’ Erastus Asare Donkor has appeared before the Three-Member Committee investigating the shooting incident that occurred in Ejura Sekyedumase on Tuesday, June 29 during protests by the youth against the killing of their colleague, Ibrahim Mohammed, Alias Kaaka.

The Broadcast Journalist who reported the protest live from the scene also covered the arrival of the security personnel.

He was, therefore, asked to give a detailed account of what transpired to the best of his knowledge.

The interrogation lasted for one and half hours.

Marie Louis Simmons, a Principal State Attorney is the Secretary to the committee.

Two persons died and four others got injured during the protest by the youth of Ejura Sekyedumase, which was disrupted by security operatives on June 29.

Things turned turbulent as a joint Police and Military team accosted the agitated youth on the streets while demanding justice for late social activist Ibrahim Mohammed.

The two who died, Murtala Mohammed and Abdul Nasir Yusif, were allegedly shot by security officers as they demonstrated against the murder of Ibrahim Mohammed popularly known as Kaaka.

The Committee is expected to investigate circumstances leading to the incident and recommend sanctions for persons found culpable by 9 July 2021.

DISCLAIMER: The Views, Comments, Opinions, Contributions and Statements made by Readers and Contributors on this platform do not necessarily represent the views or policy of Multimedia Group Limited.
Tags:
Commission of Inquiry
Ejura killing
Erastus Asare Donkor