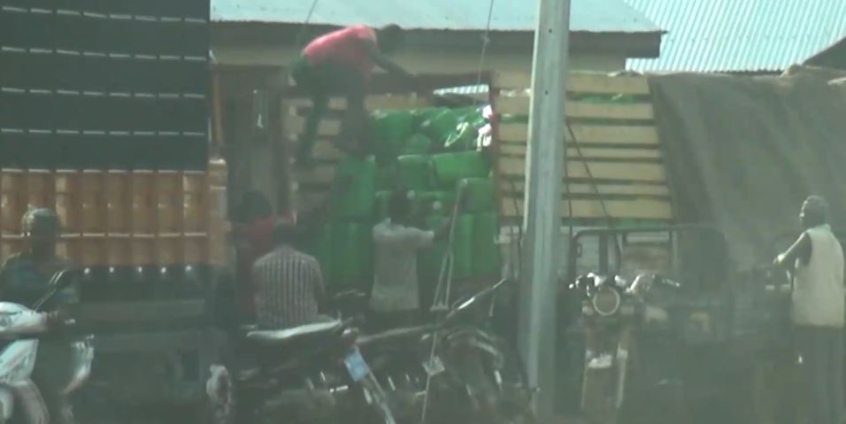 Thousands of gallons of vegetable cooking oil are smuggled every day into Ghana through the Cote d’Ivoire and Togo borders.

The state is losing millions of cedis in revenue due to the non-declaration and evasion of taxes by these importers and traders.

Top officials of customs as well as junior rank officers at various checkpoints are complicit.

The smugglers evade tax, connive with customs officials and outwit security officials making it difficult for local players to compete. This is because the smuggled oil brands are cheaper on the market.

This is a million-dollar business with a complicated network of individuals and bankrollers who profit from these deals.

Who are these smugglers and how deep is the network of intricate connections that makes this business thrive? In this edition of the Hotline documentary, I will be going undercover on a rather dangerous mission to expose the smugglers, officials of customs, importers, and traders as well as transporters getting these cheap smuggled cooking oil on the Ghanaian market.

It’s a busy market day in Tamale. The markets are flooded with cheap cooking oil smuggled from neighbouring Togo.  The dominant brands which have been sneaked into the country are Palmdor, Dinor, Kdor, Tradekey, Tilemesie, and Aya. The rest are Jomil, Sano, Aicha and Eagles.

At the time of this investigation, the smuggled oil products were selling at GHc410 cedis in Tamale while the locally manufactured ones were priced ¢475.

These cooking oils are moved into warehouses in the thick of night by a smuggling cartel in Tamale. One of the kingpins is Mohammed Hamza. He hails from Bawku. He operates under the company name; Komend Daf Enterprise. He controls a large share of the market in Tamale.

The cartels in the oil business operate in an underworld of their own and trust no one. I needed a cover story that will enable me to penetrate these kingpins running a multi-billion cedi smuggling chain. I told Hamza I desperately needed thousands of gallons of smuggled oil to break even in the local market in Kumasi.

He agrees to sell a gallon of his oil at GHc430 cedis. He deals with individuals who are buying more than 2,000 gallons of smuggled cooking oil. This will bring the figure of our transaction to over GHc800,000 cedis.

He has established relationships with big dealers in Kumasi and Accra. Hamza tells me he relies on the customs boss in Tamale to ensure safe passage of his smuggled cooking oil to parts of the country.

Hamza gives more details of how much he pays in bribes to the customs boss. He spends between ¢5,000 to ¢10,000 cedis to get the customs boss in Tamale and his counterpart in Kumasi to facilitate the movement of each consignment of smuggled oil.

For my consignment of 2,000 gallons of oil to Kumasi, he would pay at least ¢15,000 cedis in bribe to customs and police officers on the route.

He walks me through how he is able to smuggle oil from Sakanse in Togo to Tamale. He spends at least ¢65,000 on such trips.

Hamza has been in the business for years now. He took over from his father. When he encounters challenges with the authorities, he falls on the godfather of the smuggling business to bail him out. One of those days is my second encounter with him at his office. There were six trucks transporting cooking oil from Togo. He tells me customs officials are demanding a ¢30,000 bribe on each truck.

Hamza is not the only one engaged in this business. Abdul Aziz is in his early thirties. He works with another Alhaji Zakaria in Tamale. I first met him at the Ghana-Togo border, a few meters away from the customs checkpoint. He will later reveal that he was on a sting operation to smuggle cooking oil from Sakanse to Bolgatanga.

He said if I should contact him to move my consignment of cooking oil from Togo, he will charge a lesser amount of ¢415 cedis compared to the price Hamza was offering. There is a route which runs through Bunkpurugu to Walewale that he uses to transport cooking oil from Togo to Tamale if he does not want to pay the required taxes to the state.

Aziz does not work alone to cheat the system. He says there are customs officials he bribes to assist him to evade tax on the cooking oil he smuggles from Togo.

He said another way to outsmart the customs is the stock 40-footer containers with the smuggled oil. Or better still rely on VIP buses to get your oil to any part of the country.

The oil is brought in by collectors. Sadiki Mustapha is one such collector. He is responsible for transporting millions of gallons of smuggled oil from Togo to many parts of the country. He shows me a receipt bearing the sum of ¢300,000 for payment of oil he recently smuggled from neighbouring Togo.

He said they have established a network in tamale; they deal in oil and sugar. He said he would sell a gallon of the oil at 400 cedis to me. Even among the smugglers, there is a competition to control the turf.

Like Tamale, the border town of Sampa, in the Bono region has another network of smugglers. They are mainly middle-aged women. Do not be mistaken, they call the shots in how oil and which quantity must be smuggled from neighbouring Cote d’Ivoire to Sunyani and Kumasi markets.

One of them is Maame Serwa. She is easily identified at Sampa as Alhaji’s wife. At the time of the investigation, she was willing to sell the smuggled oil to the investigative at ¢370 when Hamza’s price was hovering at ¢430. She said the cooking oil has become scarce, so like many smugglers and traders, they have to leave huge amounts with dealers in Cote d’Ivoire.

She said it’s become difficult for many smugglers to bring in large quantities of oil because some customs officials are not supportive. She revealed that top customs officials at Sampa and other checkpoints have told her the government pressuring them to crack down on the operations of smugglers because it is affecting the local business companies which produce cooking oil.

Citing a recent example, she said she only paid ¢2,000 for over 400 smuggled oil she brought through the Sampa-Cote D’ Ivoire border. She paid ¢30 on a gallon instead of ¢65.

She further walks me into her trade secrets on how to outwit customs officials when transporting smuggled oil. She said vehicles conveying charcoal from Sampa hide the gallons within the sacks of charcoal. She also references the use of VIP buses in aiding their business of smuggling. It comes at a cheaper cost compared to paying the right taxes to the state.

Drivers who ply Sampa to trading communities in the Ivory Coast play a significant role in this business of smuggling oil brands such as Dinor to the Ghanaian market. One such driver is Ebi. He charges at least 10 cedis on each gallon he brings to Sampa.

I approached this driver at the VIP station at Sampa. He revealed that he is complicit in the transportation of these oils when I expressed interest in getting the oil I bought to Sunyani. He said will charge 15 cedis on each gallon because of bribes he has to pay to customs officials and the police when transporting the goods.

There are many checkpoints between Sampa and Sunyani. One of them is the Sumua checkpoint. I decided to test claims of the complicity of customs officials in the smuggling of cooking oil to parts of the country. I meet Lilian Abrafi and her superior at the checkpoint. They are willing to prepare forged duty paper to enable the team to move our oil from Sampa past their checkpoint.

They suggested strategies the team could use to outsmart other checkpoints to get my smuggled oil to the final destination. One of the ways is to use the duty papers of one of the big shots in the smuggling business in Sampa. Lilian calls Mrs Noami as she is referred by dealers and importers in this business.

It’s time to test how deep this canker is. The investigative team bought 90 gallons of cooking oil smuggled from Cote D’ Ivoire.  Maanu Yaa Gladys is the dealer. I spend almost 40,000 on this transaction which includes transportation of this merchandise. She said her husband aids her customers to outmaneuver the customs officials by transporting the goods for them.

These gallons of cooking oil were transported in the thick of the night by this driver. He said he had to pay bribes to customs and police officers to enable him to cross the checkpoints with the smuggled oil.

Many of the retailers of smuggled oil get their oil through this means. That’s how they cheat the state of its badly needed revenue. One of the retailer is Mame Fiapre.

She said she serves many customers in many parts of the country but there seems to be limited supply in recent times, and the high cost of bribes paid to customs officials, is pushing her out of business.

This explains why many shops that are popular retail points of this smuggled cooking oil in Sunyani like Matt Rubbers Trading Centre and Murrows Low Cost do not sell the same brands at the same price.

DISCLAIMER: The Views, Comments, Opinions, Contributions and Statements made by Readers and Contributors on this platform do not necessarily represent the views or policy of Multimedia Group Limited.
Tags:
Customs officers
Investigation
JoyNews
Smugglers Paradise
Smuggling