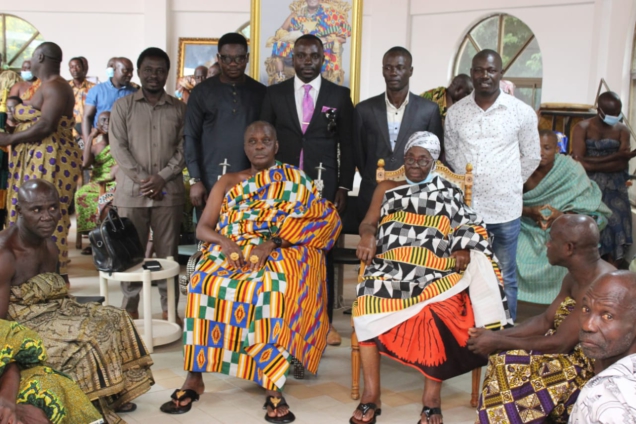 The Municipal Chief Executive for Juaben in the Ashanti Region, Omane Aboagye, has promised to run an open-door administration to drive development in the Municipality.

The MCE disclosed this when he paid a courtesy call on the Juaben Traditional Council to thank the chiefs, especially Daasebre Otuo Siribour II, the Omanhene of Juaben, for their massive support when he was nominated for the position by the President.

He also asked the chiefs for their blessings, prayers, advice and cooperation to push forward the development agenda of the Municipality.

Mr Omane Aboagye also thanked the President for the confidence reposed in him and lauded the Assembly Members for the overwhelming endorsement.

The MCE was accompanied by the Presiding Member, Osei Tutu, some Heads of Departments, Assembly Members as well as party executives.

The Paramount Chief of Juaben, who is also the Chairman for the Council of State, Daasebre Otuo Siribour ll, advised the newly-elected MCE to serve with respect, honesty, humility, integrity and be God fearing in all his endeavors.

He assured the MCE of the support of the traditional council so he can accomplish his vision.