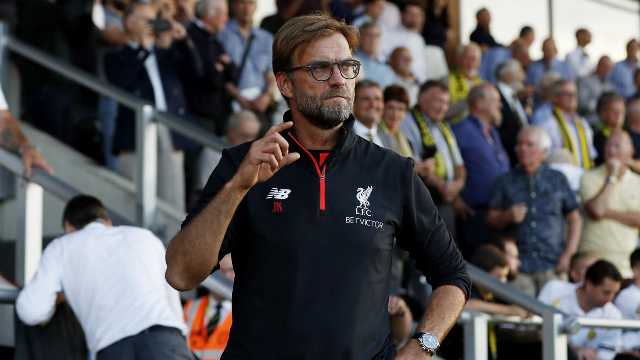 Liverpool manager Jurgen Klopp has questioned Gary Neville's suitability as a TV pundit by making a reference to his short-lived career as a manager.

Reds goalkeeper Loris Karius has been criticised for his recent displays by Neville and the ex-Manchester United defender's brother Phil.

"He showed he struggled with the job to judge players so why do we let him talk about players on TV?" Klopp said.

Gary Neville was sacked by Valencia in March after only 28 games.

The ex-England right-back returned to his role as a television pundit for Sky Sports after his unsuccessful period managing the La Liga club.

Karius's mistake led to Nathan Ake's late winner in the 4-3 defeat at Bournemouth and the German, 23, was out of position when West Ham's Dimtri Payet scored a direct free-kick in Sunday's 2-2 home draw.

Klopp added: "The pundits, former players most of them, have forgotten completely how it felt when they got criticised.

"Especially the Neville brothers; the one who was the manager, he obviously should know that too much criticism never helps.

"But he is not interested in helping a Liverpool player I can imagine, but that makes things he says not make more sense.

"I don't listen to them. I am pretty sure [fellow Sky pundit] Jamie Carragher doesn't speak too positively about Manchester United players.

"Obviously the Neville brothers don't like Liverpool. By the way, you can tell him I am not on Twitter so if he wants to tell me something Twitter doesn't help."

Both Gary Neville and Carragher criticised Karius after the loss at Bournemouth in November, before the former Mainz keeper hit back at Neville in newspaper interview.

His brother Phil then said the keeper should "keep his mouth shut", as BBC's Match of the Day analysed the keeper's display against the Hammers last weekend.