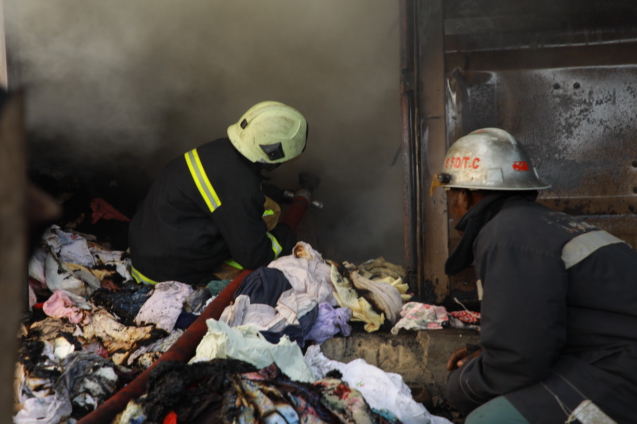 The Interior Minister, Ambrose Dery has commiserated with affected traders in the Kantamanto fire outbreak.

On Tuesday morning, parts of Kantamanto market were destroyed by fire with many goods and shops worth millions of cedis being affected.

The Minister after many hours of the inferno, led a delegation on behalf of President Akufo- Addo to assess the situation firsthand.

Addressing the victims, he promised that government will provide psychological support for them to deal with the situation.

“First of all, I want to commiserate with them on this unfortunate incident. I sent my men, the fire service, the police and NADMO to come and see what is happening. I want to encourage them to be cool, a bus will come and pick them to the police station to get a record of them and the psychologists will talk to them…they should cooperate with security agencies here and God will help us.”

He urged them to be patient as his Ministry will act on any report from the Emergency Response team.

Meanwhile, the General Secretary of the Ghana Used Clothing Dealers Association, Edward Atobrah has described the fire outbreak as a big blow to the Association.

He wondered how the traders will survive in the current economic hardship since most of their goods were given to them on credit.

“This is a big blow to the Ghana Used Clothes Dealers Association … Even right now, we are trying to survive and then your goods are burnt, so where do you get money to feed?”

He called on the government to intervene and support the traders.

“At least the government should come in if not all, at least support us with something to take care of the situation. Those who have their goods burnt, if we can help them buy some few bales, so that they can also be resilient and continue their business,” he appealed.

DISCLAIMER: The Views, Comments, Opinions, Contributions and Statements made by Readers and Contributors on this platform do not necessarily represent the views or policy of Multimedia Group Limited.
Tags:
Ambrose Dery
GNFS
Interior Minister
Kantamanto fire outbreak