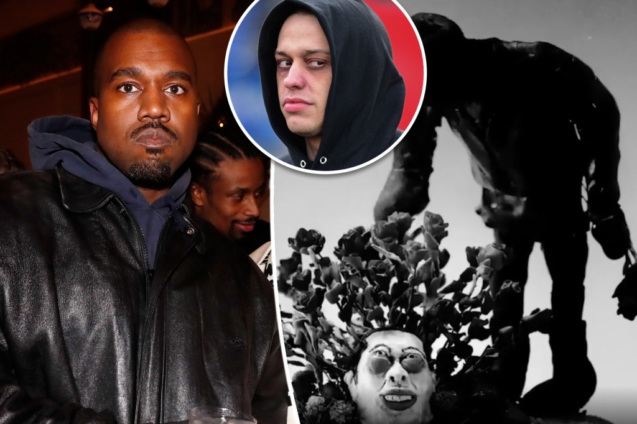 Kanye West’s disdain for Pete Davidson has been memorialized in his new music video with the rapper literally kidnapping and burying a cartoon version of the “Saturday Night Live” star.

The “Eazy” video gives life to the Game-featured viral hit that caught mass attention in January due to 44-year-old West rapping about “beating Pete Davidson’s ass.”

Dropping the mostly claymation clip on his Instagram page Wednesday, West is seen rapping while sitting on top of a wooden coffin in the black and white video. Later, a claymation version of the rapper is seen putting a bag over a Davidson-like character’s head and kidnapping him.

He then ties up Davidson’s character and drives via a 4-wheeler to an abandoned area, burying the comic up to his neck before planting rose seeds around his head.

The flowers eventually bloom, and a still-alive Davidson watches as Ye picks several, and loads them into a pickup truck.

The image is a clear reference to West gifting estranged wife — and Davidson’s girlfriend — Kim Kardashian a truckload of roses on Valentine’s Day.

“EVERYONE LIVED HAPPILY EVER AFTER, EXCEPT SKETE YOU KNOW WHO. JK, HE’S FINE.” read the final frame, with the word “SKETE” scratched out.

Only time will tell if Davidson truly takes offense to the clip or if he will laugh it off, as he did when he first heard the diss.

“Pete thinks it’s totally hilarious,” an insider told Page Six back in January. “Not just that — he thinks the whole [tabloid drama with him, West and Kardashian] is hilarious. He loves it.”

The video made its debut shortly after a Los Angeles Superior Court Judge officially declared Kardashian to be legally single.