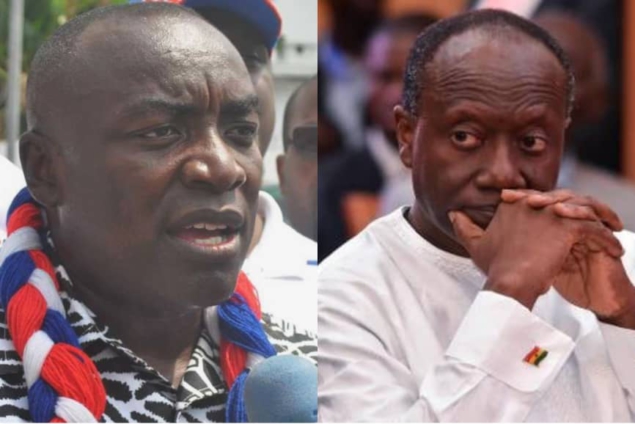 A former General Secretary of the New Patriotic Party (NPP), Kwabena Agyapong has called for the resignation of Finance Minister, Ken Ofori-Atta.

His call is based on Ghana’s return to the International Monetary Fund (IMF), despite the earlier claims by the Finance Minister about the country’s bright economic prospects.

Speaking in an interview on The Hard Truth on Wednesday, he explained that the contradiction between the Finance Minister’s assuring remarks and the country’s subsequent request for an IMF bailout should be enough grounds for him to step aside.

“I would think that on the basis of what he said two weeks before to the country, which is that we will never go to the IMF and [that] we’re a proud country with the resources.

“When you speak like that, you should look yourself in the mirror and say, look I got it wrong. Mr President I thank you for giving me the opportunity and I should stand down [resign]’, he told host, Nana Akosua Konadu.

The suggestion by Mr Agyapong adds to a series of calls urging the Finance Minister to resign over his poor management of the economy.

Notable personalities like ex-President John Dramani Mahama and a former Chief of Staff under the Kufuor regime, Kwadwo Mpiani, have all impressed upon Mr Ofori-Atta to quit his job.

In a Facebook post on July 2, John Mahama said Mr Ofori-Atta has already lost his credibility, trust and confidence after he supervised “the disastrous collapse of the economy”.

He intimated that the Finance Minister should not be added to the team of negotiators engaging the International Monetary Fund (IMF) for economic support.

“In addition, given his obvious failures, the Vice President must be relieved of his responsibility as Chair of the Economic Management Team to enable the President to reconstitute the team. We must draw useful lessons from this episode and avoid cheap politicking with the economy that can only yield the disastrous outcomes that have brought us here”, Mahama further emphasised.

On his part, Mr Kwadwo Mpiani said Ken Ofori-Atta must take a personal decision to resign.

“Honestly, if I were the Finance Minister, from my utterances and then what has been happening, I will just go and say Mr President, thank you so much. I think it best for me to sit back for another person to take over.

That will be my personal decision. But I am not going to tell any President to drop the Finance Minister or any Minister. That should be left to the President,” he said in an interview with JoyNews on Thursday, July 14.

But reacting to these calls and the widespread public backlash, Ken Ofori-Atta says he will not vacate his post.

Speaking in an interview with JoyNews during the recently-held National Delegates Conference of the NPP, he indicated that, even though he has firm convictions about the economy, the impact of the COVID-19 pandemic and the Russia-Ukraine war compelled government to engage the IMF.

In his rebuttals, he therefore stated that the calls for him to resign is like telling a father to abandon his kids because he changed his mind on an issue.

Ghana’s return to the IMF was contained in a press statement which was issued by the Information Minister, Kojo Oppong Nkrumah, on July 1, 2022.

This generated a lot of debates with citizens still divided over the relevance of the move.

But according to government communicators, the decision to return to the IMF will help the country close its fiscal gaps and place the economy on a better footing.

Meanwhile, ahead of the support from the IMF, Parliament on Wednesday, July 20, approved a $750 million loan request from the Finance Ministry

This was after the Chairman of the Finance Committee, Kwaku Kwarteng laid the motion for approval.

According to him, the loan will help the government raise the needed funds to complete the infrastructural projects in the 2022 budget.