Hundreds of passengers were stranded at Kenya's main international airport after a strike caused major disruption to flights.

The military was deployed to try to overcome the industrial action at Nairobi's Jomo Kenyatta airport.

By late afternoon, Kenya Airways said most of its affected departing flights had been rescheduled. However, some regional flights have been cancelled.

Airports in Mombasa, Eldoret and Kisumu were also affected.

Workers are unhappy about plans to merge the airport authority and the national airline.

The government condemned the strike as illegal, and Kenyan air force personnel were brought in to help screen passengers. 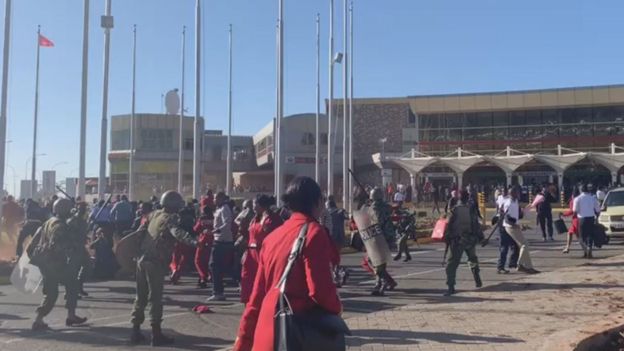 Earlier, there were clashes at Nairobi airport between demonstrating workers and paramilitary riot police. Officers used batons and tear gas to disperse strikers, some of whom were injured.

A number of stranded passengers needed medical treatment after inhaling tear gas, according to a reporter for the AFP news agency.

A key figure in organising the strike, Kenya Aviation Workers Union secretary-general Moss Ndiema, was arrested. A report on the privately owned Daily Nation newspaper's website said he had been "roughed up".

Frustrated passengers complained of a lack of information and support from the authorities, with some travellers waiting for hours with no update on their flights.

What was the strike about?

It began at midnight local time (21:00 GMT on Tuesday). Fire engines were withdrawn from the runway, and security, check-in and baggage-handling staff also stopped working.

The unions are opposed to a plan that would see the loss-making Kenya Airways taking over the management of airports from the profit-making Kenya Airports Authority (KAA).

The aviation workers complain of unfair staff hiring, poor remuneration and that the proposed take-over would put their jobs at risk.

Transport Minister James Macharia told journalists that jobs would not be lost in the merger, and branded the workers who had caused the disruption "criminals".

"We have identified those who were involved and action will follow shortly," he said.