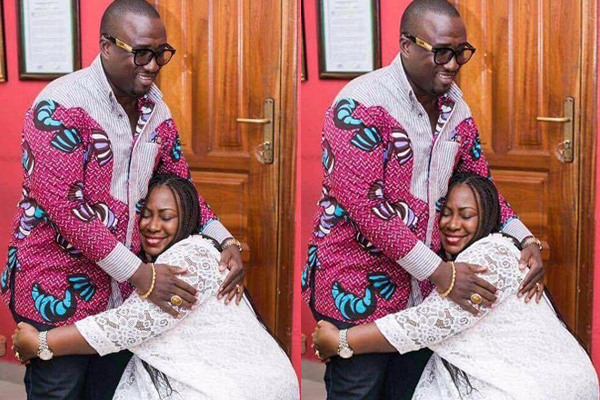 Television hostess, Gifty Anti has denied that she knelt before her husband in a now-viral photograph that has resulted in many questioning her stance as a feminist.

The photo which shows Gifty Anti in an embrace with husband Nana Ansah Kwao was met with a backlash on social media with many bloggers accusing her of abandoning her feminist ideals.

In a post on Instagram, Gifty Anti said such reports were motivated by persons who were scared by the growing feminist movement in the country.

She explained that contrary to the reports, the picture was captured on her birthday when she out of excitement hugged while seated on a stool.

She posted: "Well it seems the word FEMINISM and the coming up of young ladies joining the movement is scaring some people.

"It was my birthday, 23rd January, 2017, and my husband gave me a stool. I was so excited and honored. He put me on the stool and I hugged him.

"But well according to some bloggers, I was kneeling before my husband and so some feminists are 'heartbroken'. Lord have mercy".

Mrs Anti also stated that, there was nothing wrong with a wife kneeling before her husband.

"And by the way what if I was kneeling before my husband?(who is a chief too). Does it make me less of a feminist? Which feminist code does loving your husband break? My Name is Oheneyere Gifty Anti and yes I am a FEMINIST, married with many children," she added.