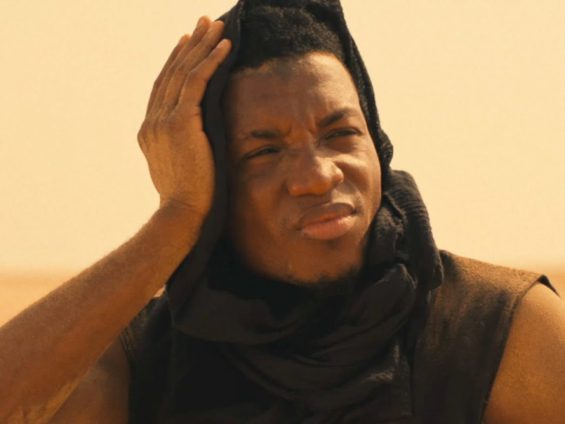 Hiplife musician, Kofi Kinaata has dropped the long-awaited visuals for his hit singles, Thy Grace, Part 1 and 2 on Wednesday, October 20.

The videos shot by Babs Direction were set at different locations in the United Arab Emirates.

The artiste, born Martin King Arthur, in the first edition of the duology captures the viewers’ attention as he lies amidst some others in the desert.

He portrays himself as a migrant who is using illegal routes to access the western world in search of greener pastures.

As a Goodwill Ambassador for Safe Migration to the International Organisation for Migration, the ‘Susuka’ hitmaker does not fail to warn the youth to desist from the illegal voyage.

Contrary to the first video, Kofi Kinaata is living the best life in the second. Adorned in fashionable clothes and cruising on a boat with some friends – living the life of every dreamer; to be rich enough to bless others.

However, the most striking scenes are video clips from his early days when he was ‘hustling’ to make it in the Ghanaian music industry.

But barely thirty seconds after showing those, Kofi Kinaata comes in again and this time while smiling, he clasps his hands as he sings “asem a me ká, I thank God oo” to wit “whatever I have achieved so far, I thank God.”

On April 15 this year, the songwriter released Thy Grace to commemorate his 31st birthday. The intriguing lyrics of the song captivated many listeners both at home and abroad.

With the resounding feedback, Kinaata took fans by surprise with the release of a sequel to Thy Grace on August 13, 2021.

Similar to the first, Fante Rap God swept listeners off their feet.

The songs succinctly expressed gratitude to God for all the successes he has chalked so far.

Many renowned people including Member of Parliament for Odododiodio, Nii Lante Vanderpuye, and former Minister for Youth and Sports, Elvis Afriyie-Ankrah have declared their undying love for the artiste.

As fans continue to get wowed by his creative craft, the four-time VGMA Songwriter of The Year awardee has made it evident that divine grace is what has brought him thus far – with two solid visuals to back it.

DISCLAIMER: The Views, Comments, Opinions, Contributions and Statements made by Readers and Contributors on this platform do not necessarily represent the views or policy of Multimedia Group Limited.
Tags:
Kofi Kinaata
Thy Grace
Videos