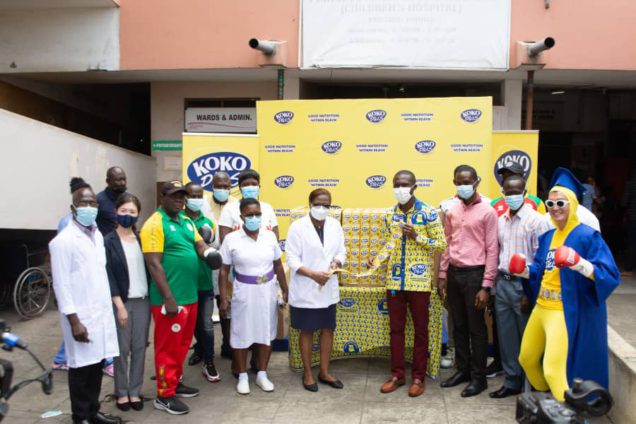 As part of efforts to combat malnutrition amongst children in Ghana, KOKO Plus Foundation, a Non-Governmental Organisation focused on preventing malnutrition in infants and young children, donated some 9,000 sachets of nutritional supplements (micronutrient powder) to the Princess Marie Louise Children’s Hospital.

The donation which comes on the back of this year’s Malnutrition Awareness Week, took place on Wednesday, October 6, 2021.

Speaking at a brief ceremony at the Princess Marie Louise Hospital, the Country director of the foundation; Yusuke Takahashi said;

“The future of a nation depends on a healthy and well-nourished population, which is realized when healthy diets are provided from infancy. Unfortunately, Ghana has an estimated 90,000 children still suffering from various forms of malnutrition, contributing to risks of repeated childhood diseases and even death.”

“With KOKO Plus, we are contributing to a brighter future for our children by providing good nutrition within reach. As our contribution to the observance of Malnutrition Awareness Week, we donate these 9,000 sachets of KOKO Plus to the Princess Marie Louise Children’s Hospital for 300 children, to be used every day for one month. This is to support the work of the hospital in addressing infant malnutrition”.

Explaining the benefits of the supplements, Dr. Kennedy Bomfeh; a director of the foundation said KOKO Plus has been manufactured to compensate for the nutritional imbalances amongst growing children in Ghana.

“KOKO Plus is a protein micro nutrient powder that was developed in Ghana [and] locally produced from locally available raw materials to solve the local problem of infant malnutrition. It is meant to be given to children age 6 months to 24 months, and the reason is that the children in that age group, about 19% of them are too short for their age, we call that stunting.

“Stunting is not just the physical appearance of a child, But the fact that cognitive development is severely affected, because the nutrients they require for development are insufficient for them. So, we made this product to address that problem”, Kennedy Bomfeh explained.

He also mentioned that apart from the donation, the Foundation has plans to extend its activities to all parts of the country, especially the rural areas.

Receiving the donation, the acting head of the Children’s Hospital, Dr. Faye Boamah-Mensah expressed her gratitude for the gesture and used the opportunity to advise nursing mothers to strike the right balance between breastfeeding and the use of complimentary feeding materials.

According to her, the inability of nursing mothers to find the proper balance between breast milk and complimentary feeding is one of the major causes of infant malnutrition in Ghana.

Speaking at the event, a registered dietician from the Ghana Health Service, working at the facility, Priscilla Tette-Donkror also called for mothers to be supported to initiate breastfeeding early; adding that, after the six-months of exclusive breastfeeding, mothers must be guided on the right food to give to their children to prevent any health complications.

Child malnutrition remains one of the biggest threats to the development of children across the globe. According to the Ghana Demographic and Health Survey, as of 2014, nearly 1 in 5 children under age (five) 5 were stunted, stemming mainly from low nutrient density found in the traditional weaning meal ‘koko’.

The donation was therefore an attempt to address the situation.

KOKO Plus Foundation is founded from The Ajinomoto Foundation acquiring Ghana Nutrition Improvement Project (GNIP) to realize a more social impact via a social business model supported by Japan’s Ministry of Foreign Affairs and by partnerships with CARE, World Food Programme (WFP) and a signed MOU with the Ghana Health Service (GHS) in 2018.

The Ghana Nutrition Improvement Project (GNIP) was initiated in 2009 by The Ajinomoto Group to curb malnutrition in infants and young children using a protein and micronutrient supplement – KOKO Plus, to add to complementary foods for enhanced nutrition.

The World Food Programme registered KOKO Plus as a “Nutritious powder” in its food basket in 2018.