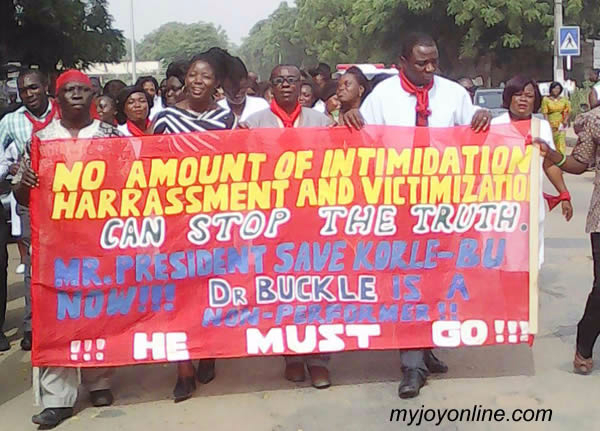 Chief Executive and Board of the Korle Bu Teaching Hospital have been hauled to the Accra High Court for attempting to sanction the leadership of the hospital’s senior staff association for alleged misconduct.

Plaintiffs, members of the Korle Bu Senior Association, are seeking to place an injunction on the disciplinary procedure started by the board of Ghana's premier health care facility.

Last year the senior staff adopted a resolution that leveled several allegations against the Chief Executive of the hospital, Gilbert Buckle, including allegations of financial mismanagement.

Members of the Association said the Chief Executive was repeating mistakes his predecessors made, and passed a vote of no confidence in him.

They cited various reasons including the lack of medicines at the hospital’s pharmacy and called for his removal.

The board subsequently opened disciplinary proceedings and cited the leadership of the association for gross insubordination, disregard for the hospital’s laid down procedures for grievance resolution and misrepresentation and peddling of falsehood.

Board Chairman of Korle Bu Anthony Mawuli Sallah told Joy News “all the allegations have no foundation. They are baseless and are untrue.”

In a bid to foil the disciplinary procedure initiated by the board, the staff have filed a writ at the High Court demanding that an injunction be placed on the proceedings.

Joy News sources say the Korle Bu Board had intended to either suspend, freeze salaries or even dismiss the leaders of the senior staff association, actions the senior staff would have none of.