Kudus Mohammed: The heart of a Black Star 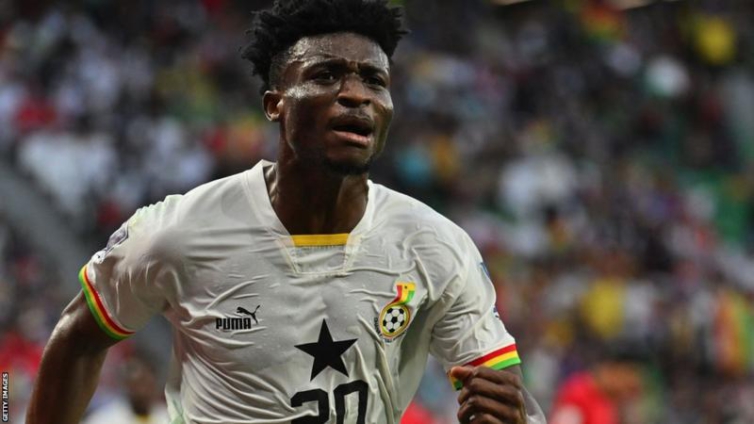 The caption had the image of Mohammed Kudus, drenched in water, mouth widely opened, ears standing, chains of sweat dripping down his neck.

Within the same picture, his arms were opened, hands lowered, and fists tight. It is an image of a man in strides, but it had an incomplete story.

Before the photo was taken in that posture, he was seen impersonating Qatar’s high jump record holder, Mutaz Barshim, and Swedish pole vault icon, Gustav Duplantis with an incredible flight in the air as though he had springs under his feet. He would pump his fist into the skies and accompany it with a scream.

A sea of red, gold, and green with a black star at heart fans – 1000s in the stands some of which were ministers of state, and millions across the globe rose on their feet involuntarily.

Imagine what followed. Just. Imagine. The clock had ticked 33 and Ghana had just concluded unbreakable 31 passes, the last of which was an inch-perfect cross from Jordan to find Kudus.

The Nima boy, moved two steps before flying high to direct the ball into the net and the crowd responded.

Kudus is not one you see often after 90 minutes of football. He is the introverted kind of footballer who looks innocent off the pitch, but the leader of a group of renowned players without an armband. The nucleus of a Black Star, the brain supplier, and the finisher.

Five years ago, the Ajax boy was not known in Ghana’s football circles, not even among his colleagues that competed at the 2017 U-17 World Cup in India.

This boy, born in Nima, groomed in Right to Dream Academy, and living a dream in Doha, Qatar on the biggest stage of global football, could not even earn a starting role against India in the U17 tournament in the South Asia country.

Emmanuel Arkoh Mensah of then Ghana premier league club, Wa All Stars now Legon Cities, Gabriel Larveh formerly of Division One League side, Tema Youth, and Mohammed Iddriss, a product of Cheeter FC, were all rated above Kudus in their ranks.

This was a bunch of talents with incredible substance; individually and collectively, these boys wowed even neutrals off their feet. Intricate play, delicious touches.

Kudus, the star of this group that has had football fans gaping was on the periphery.

Paa Kwesi Fabin, the man who assembled these boys, and would be seated in the stands to watch a boy he’s had a hand grooming, saw little of him, but Tom Vernon, owner of Right to Dream Academy, knew the jewel he had.

A little over five years ago, when he invited a group of journalists to the Academy in Akosombo, he pointed out Kudus as the next big thing to happen to Ghana football, but many of us had eyes on other players who appeared more talented from our layman’s view.

Tom was right. This 22-year-old abilities on the ball are above his age. Arsenal legend, Thierry Henry, drooled watching this boy from Nima when he left the Netherlands defender, Virgil van Dijk, standing aloof and crashed a left-footed drive into the roof of Allison’s post.

“He came from the Academy Right to Dream from Ghana and he is living the dream,” Henry said on BT Sport when the former Nordsjaelland forward scored a screamer in a Champions League contest against Liverpool.

“Take a bow son, what a finish from Kudus!”

Many have taken a bow including FIFA. Not many players of Kudus’ ilk making their debut on a stage like this gets the world in awe.

Kudus has done it with distinction. He’s that animal whose quality eclipses his age.

“Did you see any pressure?” For me, it’s not about being young, it’s about a player who is good.”

Kudus is good. At 22, he treats football with so much kindness that makes it sound as though it’s a mockery if ‘talent,’ is used to acknowledge his skillset.

The word is forced on society to accept it. If there is another word that better defines what he has got under his feet, it suits him.

Skill, composure, finishing, name it. Kudus is a football academian. A boy filled with arrogance of talent has wowed football-loving fans and continues to let them accompany his elegance and artistry with raucous applause and whoops each time, each moment, each match day.

Black Stars assistant, Didi Dramani described his rise as “transformative” in an interview with Joy Sports two years ago.

“At Nordsjaelland, Kudus got his major education in football, where he developed various aspects of his game by playing in different positions as a central midfielder, false nine, wide midfield, and wide attacker.”

That transformation has groomed a jewel whose contribution to this Black Stars team since former coach, Kwasi Appiah gave him his debut three years ago against South Africa had been epic.

In 20 appearances, he has seven goals. The first of these goals was at the Cape Coast stadium when he rose from the bench to announce his arrival into this team of national pride, hitting the roof of the net with a sumptuous strike.

He would go on to score six more, two of them before the global cameras for the global eyes, and FIFA gladly acknowledged Ghana’s gold in their competition.

At minute 33, he guided Jordan Ayew’s delicious cross into the net to announce his presence, but the biggest, from a Ghanaian perspective, happened at minute 68. Left-back Gideon Mensah made a darting run to the flank and delivered a low cross into the box, Inaki Williams mistimed, and guess who the gods of football position at the right spot, it was Kudus.

With his mother watching at close range, he took a touch to usher the ball into the optimum shooting position, kept his composure and footing, and propelled the ball unstoppably past Kim Seoungyu. The Right to Dream Academian celebrated with a large smile, and so did the Black Stars faithful.

The dynamic young midfielder is a star.

“He is on the right track to be a great, great player,” Otto said of his hero on Monday.

Erik ten Hag, his former manager at Ajax and now at Manchester United, saw enough in their time working together to label him a “player with incredible potential.”

What excites Ghanaians most about Kudus is his ability to influence games in different ways – win the balls, caress it with class, and finish them like a maestro.

So, what would excite Ghanaians on Friday afternoon when 12 years of emotional pain and torture is reloaded, not at the Soccer City Stadium in Johannesburg, but at the Al Janoub stadium in Doha, would be a day Kudus in his element would drive Ghana past Uruguay and book them an early flight home.

DISCLAIMER: The Views, Comments, Opinions, Contributions and Statements made by Readers and Contributors on this platform do not necessarily represent the views or policy of Multimedia Group Limited.
Tags:
2022 FIFA World Cup
Black Stars
Mohammed Kudus
Muftawu Nabila Abdulai