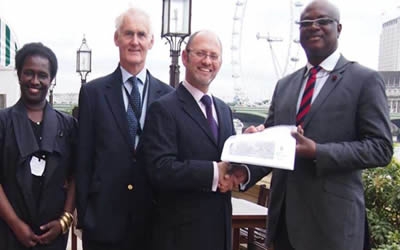 WCN aims to accelerate development of urban infrastructure and the operational systems for member cities.

The Network also seeks to achieve development for member cities by supporting Mayors at the forefront of solving challenges confronting their cities.

At a meeting with the House of Lords last Monday, Mr Bonsu said, just like other member cities, "Kumasi looks forward to working with WCN to solve the challenges…arising from rapid urbanisation, resource depletion, climate change and the pressures on our infrastructure and economic systems”.

The meeting with the House of Lords, which was facilitated by JustGhana Ltd, makes Kumasi the first African city to join the WCN.

Brian Kilkelly, CEO of WCN said he was delighted to have Kumasi as WCN’s first African World City.

"We will work with Mayor Bonsu to foster relationships with other mayors and city leaders seeking to create sustainable, resilient, and vibrant cities”, he added.

According to Clive Dutto, WCN Advisory Board Member,  the move by Mr Kojo Bonsu is a strategic one which will allow Kumasi to engage with leading world cities such as Barcelona, Helsinki, London, New York, San Francisco, and Tokyo.

JustGhana, the facilitator of the Kumasi-WCN meeting, supported by the British High Commission in Accra and the UK Trade and Investment (UKTI), has also formed a consortium of UK and Ghanaian companies including leading architects, regeneration experts, engineers, international investors, developers and infrastructure companies.

The consortium is working with UKTI in Accra and Kumasi, to promote projects which create jobs and business opportunities, build relationships, share knowledge and generate partnerships.

Lord Hunt, Chairman of JustGhana, said "leaders and politicians must understand the importance of investing in urban infrastructure to ensure that cities are adaptable, efficient, sustainable and connected. We look forward to working with WCN to deliver Mayor Bonsu’s ambitious and visionary urban regeneration plans in Kumasi”.

Mr Kojo Bonsu will speak at leadership events around the world including the forthcoming 'World Cities Network Tomorrow’s Infrastructure Forum' in London on March 6, 2014.

The Kumasi Metropolitan Assembly (KMA) and WCN will jointly host international events in Ghana and abroad, promoting the network and sharing of knowledge gained with other cities.