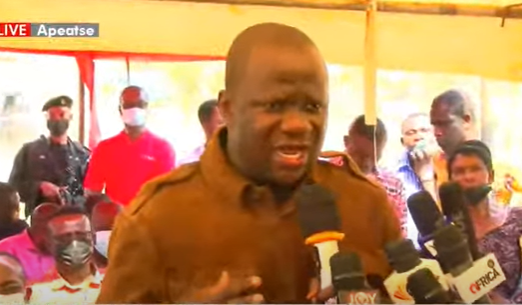 Lands and Natural Resource Minister, Samuel Abu Jinapor, has justified the additional $5 million compensation slapped on Maxam as part of sanctions imposed on the company following the Appiatse explosion.

Speaking on the Super Morning Show, Mr Jinapor stated that he in his capacity as the Minister and regulator of the mining sector has discretionary powers which can be exercised against offenders who go contrary to the regulations of the sector, hence the decision.

“The $5million is not a fine, it’s not a donation. It’s a demand of payment of an amount of money. As the Minister and who is the chief regulator of the sector, you have the mandate to sanction a company and sanction a player in the industry in all manner of ways; fines, demand of payments of an amount, imposition of conditions, suspension of their license, rearrangement of their operations, etc.

His comment was a response to a Private Legal Practitioner and mining engineer, Theophilus Dzimega, who questioned the basis on which the $5million charge was slapped on the company.

He argued that there was no justification for the “administrative” fine since the laws of the state clearly spells out how much should be imposed on offenders as fines.

“I ask where from the administrative fines as stated by the Minister. The law is clear on how much a company has to be fined so there is a breach.

“The Minister said they are using administrative power but if we go back to the Constitution, it defines how the administrative powers or administrative officials shall behave. It says ‘they shall act fairly and reasonably’ and when you go to article 296, it says they shouldn’t do things arbitrarily or capriciously. So what is the basis of the fine that has been imposed on Maxam?” he asked.

Reacting to this statement, the Minister said “I find it perplexing that there can be the suggestion that ‘on what basis do you [the Minsiter] demand this payment and not a fine. It’s a discretionary power.”

He further stated that he was uncertain what the money would be used for since government is yet to decide on that.

Again, the company is to pay $5 million for regulatory breaches regarding the manufacture, storage, and transportation of explosives for mining and other civil works.

The breaches were identified by a three-member committee set up by the government to investigate the explosion that occurred at Appiatse in the Prestea Huni-Valley Municipality of the Western Region, which killed some fourteen people and razed the entire community down.

In its report, the committee noted that Maxam had breached regulatory processes.

In a reaction, however, Maxam Company Limited said it did not breach the Minerals and Mining Regulations, 2012 (L.I. 2177) as indicated by the three-member committee set up by the Lands Ministry to investigate the cause of the Appiatse explosion.

Reacting to a statement dated February 7, by the Ministry, the Company also stated that the supposed breaches with respect to manufacturing, storage, and transportation of explosives for mining and other civil works, as noted by government were not the cause of the explosion that claimed 14 lives and razed the entire Appiatse community down.

According to Maxam Ghana Limited, the cause of the incident is related to the transport carried out by Arthaan Logistics. Nonetheless, they have agreed to pay the fine.