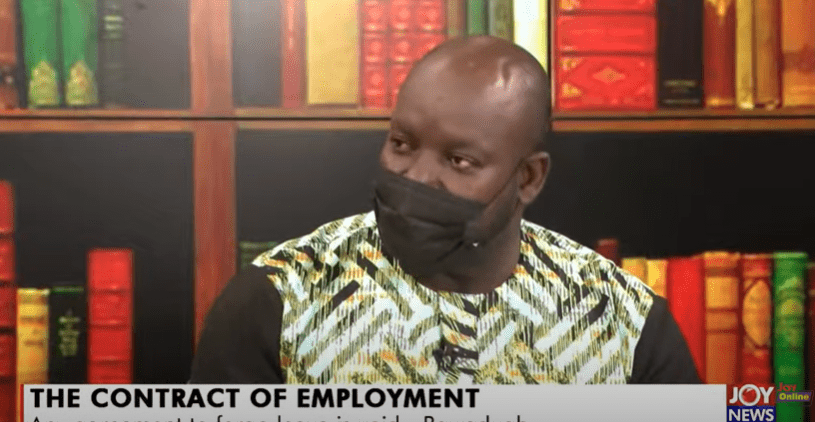 Managing Partner of the Law Alert Group, Charles Bawaduah, has asked employers to notify their employees 30 days before their leave period, in accordance with Article 27 of the Labour Act.

Speaking on Sunday, during The Law, he explained that this is to save both employer and employee the stress of disorganising work flow.

“By Law, every worker is entitled to take 15 days’ leave per year. If you look at Article 27 of the Labour Act, it requires that every workplace should have a leave schedule which should be published at least 30 days to the day every worker is supposed to go on leave,” he said.

His comment was part of discussions on ‘The Contract of Employment’, following a concern raised by an unnamed viewer who indicated that he has been asked by his employer to resign because he took leave intermittently in the course of last year.

The Lawyer is of the view that this is not enough justification for the employer to ask the employee to resign. This is because, the Law mandates employers to give their employees at least 15 working days’ leave.

“If there was agreement, the employer cannot use that as a basis for terminating the contract. If he does, the worker is entitled to claim compensation,” he said.

Nonetheless, he warned employees against taking leave in an unorganised manner, since it has the potential of disorganising the employer, which in effect can ruin the mutual relationship that exists between the employer and the employees.

He cited for instance that “if you’re supposed to go on leave in June and in January you take a day off, in February you take four days off for some event, you’re actually disorganising the employer and that may be a reason why he would have some difficulties with the employer and thereby bringing a misunderstanding in the relationship between them, which is supposed to be a mutual one,” he said.