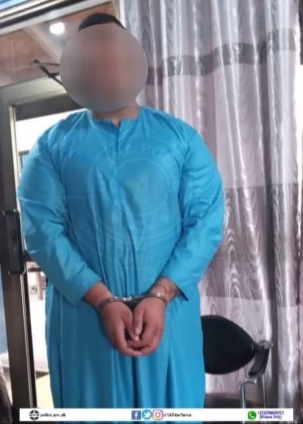 The Lebanese man who was arrested on Wednesday for threatening the life of a shop owner at Osu over parking space was arraigned today.

The case against Osman Brustani is being heard by the Accra Circuit Court.

After proceedings on Thursday, the suspect was remanded and is to reappear before the court on April 22, 2022.

According to the Police, “having put the accused person before the court in line with due process, it is now for the court to make a determination on the case.”

On Monday, Brustani pulled out a sword from its sheath and threatened to slash the throat of a businessman selling shoes made from Kente fabric.

In an Instagram post, the entrepreneur by the username @doit_ghana, revealed that Brustani parked his car in front of his shop for almost an hour. This was disrupting business, therefore, he told the Brustani to park his car at an appropriate spot.

This did not sit well with Brustani, who then went for his sword. In the viral video, he can be heard saying “Come out. I will cut your neck,” while illustrating how he would commit the act.

Meanwhile, the Police Hospital under the instruction of the IGP, Dr. George Akuffo Dampare, has provided the male shop owner threatened by the Lebanese at Osu with psychological support.

According to the Police in a Facebook post, the presence of a clinical psychologist became necessary after a phone conversation with the victim.

The IGP reached out to the victim on Tuesday, a day after the incident and per the interaction, he “seemed traumatized by the incident”.

Aside from directing that the victim be provided with psychological support, Dr. George Akuffo Dampare also paid a visit to the shop owner on Wednesday.