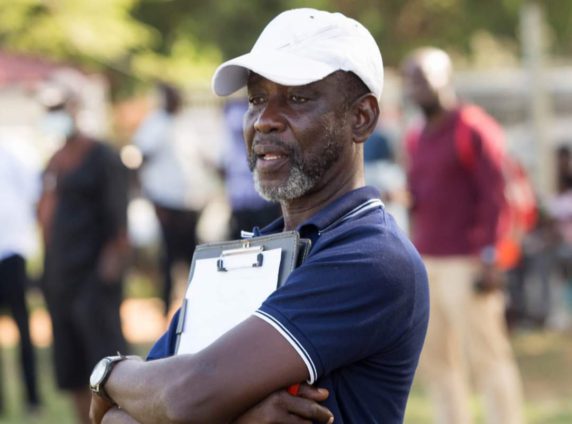 This win led to four of its players being invited to the national team trials.

Legon Knights is a hockey club that draws members from past and present students of the University of Ghana and anyone that ascribes to the notion of having a common intellectual understanding of hockey and its teachings.

Emmanuel Ahadjie started coaching in 1989 after an illustrious career as a player for Pozo Sticks and Tax Rakers.

He doubled as a player and coach for the Fire Service men’s team.

He then added the Ghana Police Men, Ghana Commercial Bank, The Female National Hockey Team
and is currently the coach of the University Of Ghana Hockey Team where he holds the record for the number of gold medals won 4 ( GUSA Gold (2006, 2010, 2012, 2020) and has won 2 Silver medals at the West African University Games (WAUG) for 2003 and 2012.

As the Assistant Female National Team Coach, he won silver at the 2009 Africa cup of Nations held in Accra and placed 3rd at the 2011 Olympic qualifiers in Zimbabwe.

As head coach, he Placed 2nd at the Olympic qualifiers held in Durban, South Africa, and Participated in the Hockey World League round 2 in Valencia, Spain in 2016.

He also won silver at the 2017 Hockey ACN in Egypt. To add to his accolades he became the first Ghanaian coach to qualify for the Commonwealth Games in 2018
and also Placed 2nd at the 2019 Olympic qualifiers in Stellenbosch, South Africa.

Fuseini Isaac Addo added that Legon Knights Hockey Club is preparing to dominate Hockey in Ghana and continentally and pledge to set up a world-class hockey institution that will set them apart from everybody.

Additionally, he pledged the team’s undying support to the past and future exploits of Coach Emmanuel Ahadjie and will make it a point to offer him the support to add to his future accolades.

In his acceptance speech, Coach Emmanuel Ahadjie reiterated his support for the club as long as they maintain an equitable playing field for everyone and pledge to promote the game of hockey everywhere they find themselves.