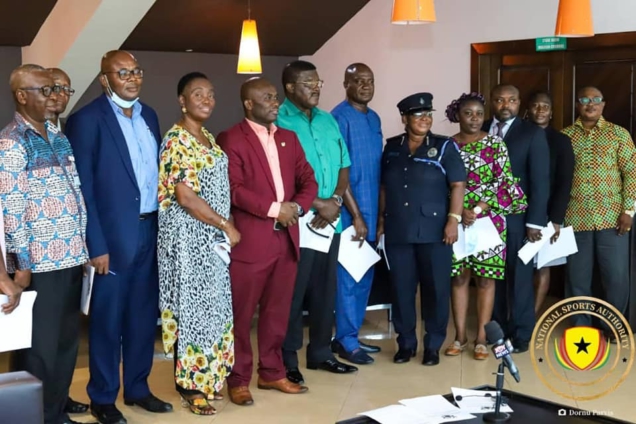 The Ghana Hockey Association have inaugurated a 9-member Local Organising Committee (LOC) ahead of the hockey Africa Cup of Nations.

The Ghana Hockey Association in conjunction with the National Sports Authority inaugurated a local organizing committee ahead of the two tournaments set to be hosted in Ghana.

The vice President of the Hockey Association Madam Elizabeth King says the idea of the LOC is to ensure that Ghana have good tournaments.

“The main purpose is for the successful organization of the two tournaments,” she said in an interview with JoySports.

“You know that we cannot organize a successful tournament without funding and therefore, the purpose is to source for fund.”

She also stated that, the purpose of the LOC is to help reduce the burden off the government.

“Government cannot take all the responsibility of what is expected to be done for the two tournaments. So the LOC is suppose help in the sourcing for funding for the accommodation, transport, other dignitaries that will be coming in and even our own teams because we cannot look after other people without looking after our own teams.”

Elizabeth went on to further explain the roles that each committee will be playing ahead of the two tournaments.

“That is why we have the various committees that are in charge of the various sessions. We have one for accommodation, security, transport, media, medical, all taking care of aspects of the hosting of the tournament to make it very successful.”

The Africa Cup for Club Champions is scheduled to take place from 1st to 8th December.

According to the Vice President, the purpose of the competition is to help the hockey team prepare for the AFCON tournament next year.

“We are using this Africa Cup for Club Champions as a test match to meet South Africa. This is because they have been a torn in our flesh. We’re always second to them and playing in our own country, we hope to unseat them. It’s going to be host and win which is what we are aiming at,” she concluded.

The two tournaments are expected to kick off in December and January respectively.