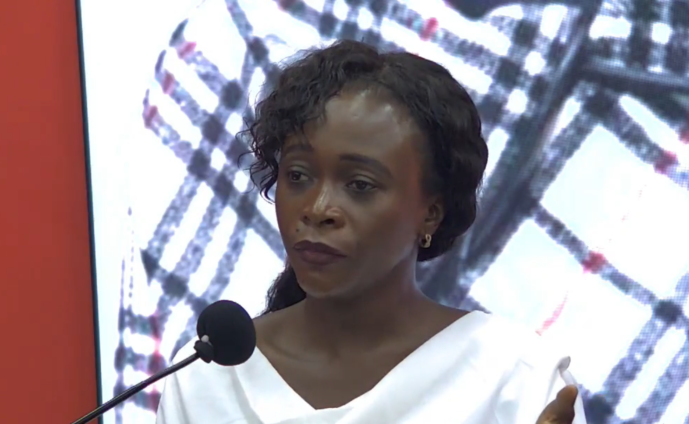 Celebrated Filmmaker Leila Djansi, has shared her experiences, observations and thoughts on the state of the Ghana film industry, amongst others.

She sat with George Quaye on Showbiz A-Z on Joy FM, on September 3, 2022. The USA-based Ghanaian filmmaker provided some details of her childhood experience in the Volta Region, career path, favourite celebrities, and the state of the Ghanaian film industry from a Film Director’s point of view.

Leila revealed that prior to moving to the United States, she spent most of her life in Ho, in the Volta Region, where she attended Kabore Basic School. Her love for filmmaking was triggered while receiving basic education, where she would “take stories and share the parts [with school mates] and perform plays”.

Her mother who had huge interest in Bollywood (Indian film industry), also played a role in Leila’s choice of career path due to time spent with her cooking and listening to stories being told. Prior to finally making a decision, she had wanted to work as a “gynecologist, and then a forensic scientist”. She also mentioned how her mother frowned upon the idea of starting a political career.

Leila Djansi is widely known as a feminist and even more for her 2011 film Sinking Sands, which won her an award for Best Original Screenplay at the African Movie Academy Awards.

She even shared her thoughts on John Dumelo’s political ambitions, stressing that, “I don’t think he should be doing politics. I think he should be working for the Ghana film industry, because he has the charisma and the ideas”. Leila who has worked with some of Ghana’s greatest actors and actresses believes John Dumelo and colleague Majid Michel, possess the necessary requirements to chart the path that leads to success for the film industry in Ghana.

The conversation with the celebrated filmmaker stayed within the confines of her occupation for a while. As a member of the Ghana Oscar Committee, she revealed a number of issues that plague them. “Since the committee was instituted, it’s been a history of every year, there’s abuse. We’ve been called stupid, idiots, and a lot of colorful names”, Leila revealed.

However, she advised that Ghanaian filmmakers support initiatives and calls from the Oscar committee, instead of fight it. She defended her personality against accusations that she shields members of the Ghana Oscars Committee. “I am hiding the members because I don’t want them to be influenced or corrupted… it’s best if [they] are invisible”, she stressed. Leila cited disunity in the film industry as a responsible for its stunted growth.

In a similar vein, she noted that “Netflix isn’t the Holy Grail”, advertising that there are other indigenous movie streaming platforms such as the all-new ‘Homi’, Akwaaba Magic and others which need subscription to grow. “What are we growing?” she quizzed, adding that “these are the places that Ghanaians should support”.

Other observations made by the Ghanaian filmmaker on the state of the film industry include inflated egos and work ethics. The latter, she believes cuts across various fields.

“I [also] run a bakery in Ghana, people do not understand routine”, she complained. Leila lamented the lackadaisical attitude towards work in Ghana, while hinting that there is a huge contrast as compared to work ethic in the western world.  She cited other challenges including technical issues, “like equipment, terminologies being different and then the learning curve which sometimes is almost non-existent”.

Leila Djansi, who doesn’t think the Ghana film industry needs any name change, also believes despite the many challenges, the industry has a potential, provided the right things are done in the various facets.

Below is a video of the full interview with Leila Djansi on Joy FM’s Showbiz A-Z.

DISCLAIMER: The Views, Comments, Opinions, Contributions and Statements made by Readers and Contributors on this platform do not necessarily represent the views or policy of Multimedia Group Limited.
Tags:
Filmmaking
Ghana Film Industry
Leila Djansi
Showbiz A-Z