A court in Libya has sentenced Col Muammar Gaddafi's son, Saif al-Islam, and eight others to death over war crimes linked to the 2011 revolution.

More than 30 close associates of the deposed leader were on trial, accused of suppressing protests during the uprising.

Saif al-Islam was not present in court and gave evidence via video link.

He is being held by a former rebel group from the town of Zintan that refuses to hand him over.

Former head of intelligence for the Gaddafi regime, Abdullah al-Senussi, is among those also facing the death penalty, as is former PM Baghdadi al-Mahmoudi. 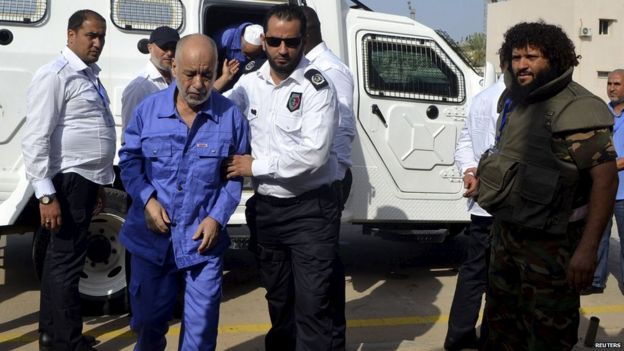 Saif al-Islam is also wanted by the International Criminal Court on charges of war crimes and crimes against humanity.

Prosecutors say that he was part of his father's plans to "quell, by all means, the civilian demonstrations against the Gaddafi regime".

Saif al-Islam will be given the right to appeal the death sentence, according to the BBC's John Simpson, who is in the Libyan capital, Tripoli.

The trial, which opened last year, has been dogged by criticism from human rights agencies.

Other defendants have received sentences ranging from five years to life imprisonment.

They faced charges including murder, kidnap and embezzlement, during the uprising that eventually toppled Col Gaddafi.

Since his overthrow Libya has been plagued by instability.

It currently has no single government, with two rival factions – one in Tobruk and one in Tripoli – each claiming to run the country.