Ligue 1: Neymar sent off as Lille win at PSG to go top 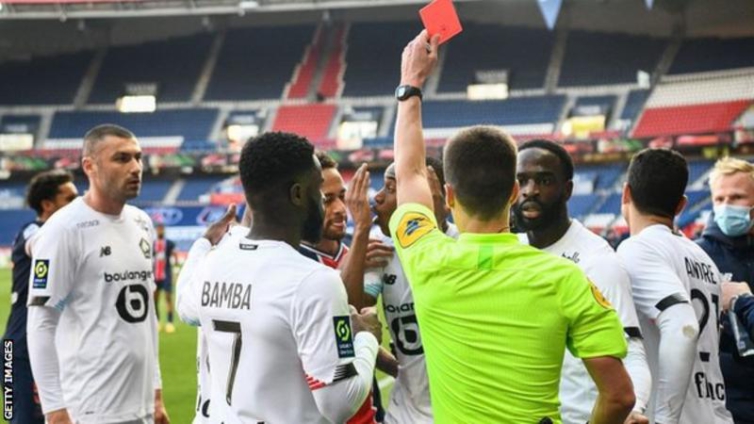 Lille returned to the top of Ligue 1 with a crucial victory at title rivals Paris St-Germain who had Neymar sent off in the closing stages.

Twenty-year-old Jonathan David’s deflected effort opened the scoring for Lille midway through the first half.

PSG’s Neymar and Lille’s Tiago Djalo were both shown second yellow cards late on after a coming together.

Neymar appeared to push Djalo after the ball had gone out of play, with the Lille defender also seeing red.

The French champions, aiming for four consecutive league titles, are now three points behind Christophe Galtier’s side with seven games remaining for both clubs.

Having lost their past two matches, Lille – who last won the Ligue 1 crown in 2010-11 – had seemingly opened the door to title-chasing PSG.

Les Parisiens defeated Lille 3-0 in the French Cup in March but Mauricio Pochettino’s side struggled to get going at Parc des Princes.

PSG, who have now lost 10 games in all competitions this season, next face Bayern Munich in the Champions League quarter-finals on Wednesday

DISCLAIMER: The Views, Comments, Opinions, Contributions and Statements made by Readers and Contributors on this platform do not necessarily represent the views or policy of Multimedia Group Limited.
Tags:
Ligue 1
Lille
Neymar
PSG