Mahama arrives in Lagos to confer with Goodluck over Boko Haram 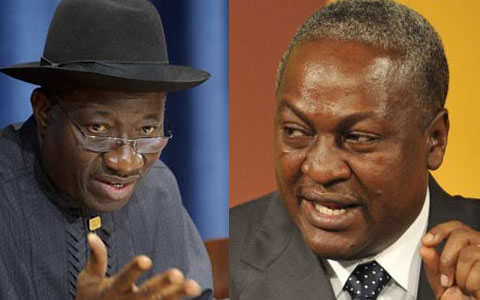 ECOWAS chairman, President John Mahama is in Nigeria to meet with President, Goodluck Jonathan to find a solution to the Boko Haram attacks.

The two presidents will strategize on how to rescue the over 200 school girls abducted in Chibok in Borno State.

Mr Malor said the sentiments to be expressed by President Mahama will represent those of the West African leaders.

He explained when there is instability in one West African country it affects the others, adding all hands must be on deck to resolve the crisis.

Malor stated there would also be bilateral discussions between the West African leaders.

Meanwhile, Nigerian Journalist, Lolade Adewuyi told Joy News' Francis Abban residents in Lagos are now more conscious of their security and safety than they have been in recent past.

He said even though Lagos residents have not been affected by the insurgent activities of Boko Haram, the security is leaving no stone unturned to protect lives and property.

He said there are lots of security at churches and mosques with members of congregations searched thoroughly before they are allowed to enter such places.

According to him, US Intelligence early on reported that the Sharatti hotel in Lagos could be attacked and the security has been beefed up to prevent any eventuality.

As we speak "there is nothing concrete to say Boko Haram is coming down south," he stated.