Mahama calls for probe into use of Covid-19 funds - MyJoyOnline.com

Mahama calls for probe into use of Covid-19 funds 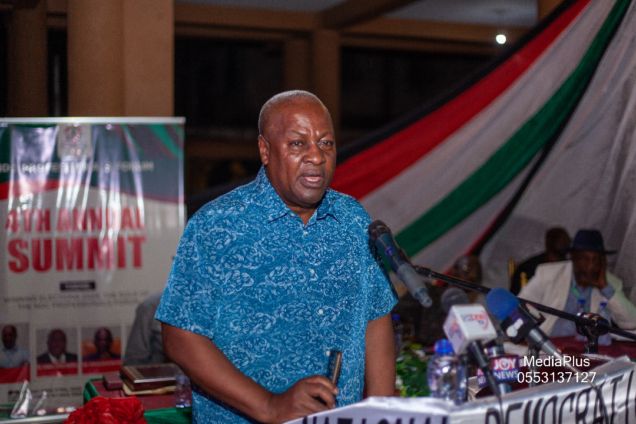 Former President John Mahama has challenged government to initiate an independent forensic investigation into the use of what he estimates to be over $25 billion in Covid-19 funds received during the peak of the pandemic.

He maintains the government used the funds to finance its 2020 electioneering campaign unless determined by a full-scale investigation.

The former President said it is regrettable that a motion filed by MPs demanding a probe into the use of the funds was not followed through.

Speaking at the opening of a two-day national summit of the NDC Professionals Forum in Kumasi, Former President Mahama called for a probe to clear all doubts.

“IMF gave us another $1 billion of SDR, that is Special Drawing Rights. Bank of Ghana gave us ¢20 billion to help cushion us from the effects of covid. And I’m saying that what did we do with all this money in 2020 and 2021?” he quizzed.

“Parliament presented a motion to ask for a parliamentary investigation into how the COVID funds were used. Who were those who threw out that motion? Is NPP administration. The only way you can prove me wrong and say that that money was not used for election 2020 is to allow an independent forensic audit into how the money was used.

“So, prove me wrong. Let’s have an independent forensic audit into how the monies we received during the Covid pandemic were used, simple! No wahala!” Mr Mahama demanded.

The former president also touched on the 30-year-anniversary of the 1992 constitution, condemning what he describes as recent abuse of the fundamental principles underpinning the country’s democracy.

“There’ll be aspects of the behaviour of this government and the leadership that mimic the activities of brutal dictatorships. Freedom of speech, which we have taken for granted in the past, has recently become an elusive commodity.

“Mistreatment and harassment of opponents and critics of this government, arbitrary arrests and detentions, abuse of power, state-sponsored violence, thuggery and killings, attacks and clamp down on media practitioners, malicious prosecutions, closure of opposing radio stations, are about a few of the anti-democratic ills that we are having to live with today,” he said.

“There appears to be a determined effort by the current regime headed by Nana Akufo Addo, to roll back the democratic gains we have made and replace it with a fascist dispensation,” he said.

The NDC Professionals forum which draws its membership from academia has been playing an intellectual role in the party.

The opening of the two-day summit yesterday saw the General Secretary of the party, formally adopt the forum as an affiliate of the NDC.

President of the NDC Professionals Forum, Ambassador Sam Pee Yalley led members in declaring support for a Mahama candidacy for the NDC.