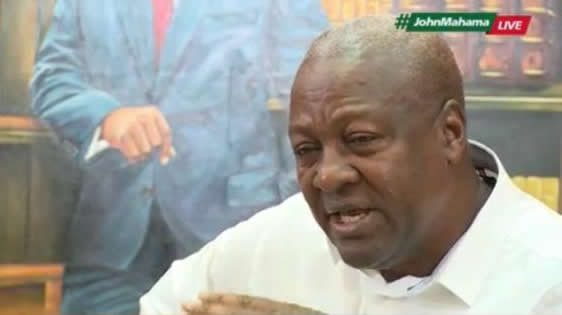 The 2020 NDC flagbearer John Mahama has condemned the Akufo-Addo government for supervising the collapse of Ghanaian-owned financial institutions in the name of reforms.

In an interaction streamed live on Facebook, the former president said government had much better options available than to collapse more than 400 financial institutions since the Akufo-Addo government took over in January 2017.

“There is a lot the government could have done,” he said and highlighted the option of bail-outs.

He stressed that bail-outs are used by governments worldwide to support struggling institutions with the view of protecting jobs.

The NDC flagbearer mentioned that the creation of ‘bad banks’ where illiquid, risky securities and troubled assets such as non-performing loans are dumped.

This option helps to clean up the balance sheet and consequently restore confidence in a financial system, he explained.

The bad bank option has been used in countries such as Sweden, France and Germany during a banking crisis.

Mahama said despite these options, the Akufo-Addo government resorted to “chaotic” reforms which he said has led to the loss of an estimated 20,000 jobs.

If indirect job losses are to be factored in, the former president said he believes the job losses could reach 40,000.

The opposition leader apologised to those affected by what he observed as imprudent decision-making.

John Mahama said government failed to examine how its own indebtedness to financial institutions could have affected their ability to remain liquid.

The former president who lost power after one term in office rejected suggestions the rot in the banking sector began under his watch.

Mr Mahama explained that the risk posed to banks during his tenure was largely caused by debts in the energy sector.

To cure this problem, his government introduced the Energy Sector Levy Act (ESLA) which collects ¢4bn annually. This fund was used to pay off some of these debts.

“How has this government used that money?” he quizzed.

The 2020 NDC flagbearer said he has a policy working group to examine the steps a future NDC government would take to address the problems created under the Akufo-Addo government.

Nonetheless, the “revocation of licence would have been the last resort”, he said.