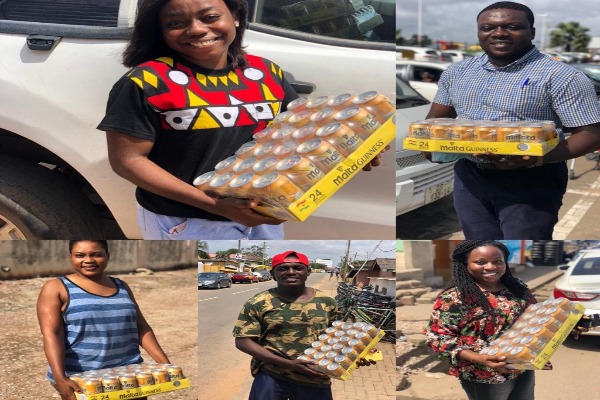 A lot more fans of Malta Guinness’ celebrity influencers have been rewarded with Malta Guinness drinks from the brand in a symbolic gesture egging them on to reach their aspirations in life.

The brand, having turned 30 recently, has embarked on activities geared towards reaching and engaging more of its consumers in a relatively more meaningful way and fanning the can-do attitude of Ghanaians.

Signing celebrity influencers like Sarkodie, Sister Derby, Naa Ashorkor, Dr Vanessa, Giovani Caleb, Regina Van-Helvert and others sometime in September, has been one such way.

The influencers so far, are believed to have inspired followers on social media to aspire to do more and overcome the vicissitudes of life, in a campaign the brand calls Enjoy a World of Goodness.

Fans were taken through some challenges which earned some of them the rewards.

The fans expressed their immense pleasure at receiving their prizes.

Malta Guinness announced in September the signing of these celebrities as influencers for the “Enjoy a World of Goodness” campaign and are optimistic they will help grow brand engagement among consumers.

DISCLAIMER: The Views, Comments, Opinions, Contributions and Statements made by Readers and Contributors on this platform do not necessarily represent the views or policy of Multimedia Group Limited.
Tags:
Enjoy a world of Good
Malta Guinness