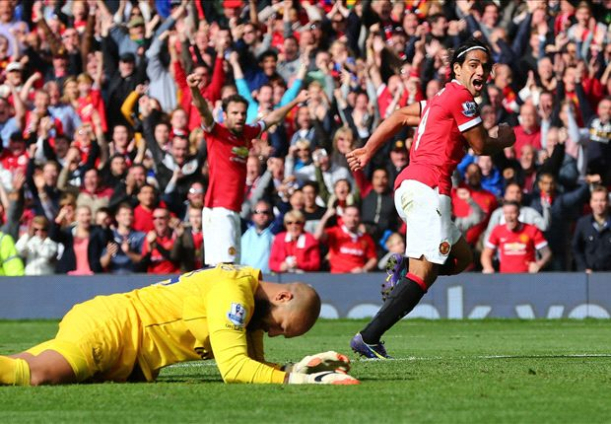 Robin van Persie's powerful strike capped an impressive win for Manchester United over Hull and offered the perfect response to those who have questioned the Dutchman's early-season form.

Those critics included Van Persie's manager Louis van Gaal, who kept the striker in his starting line-up despite saying he had a "very bad game" against Arsenal last Saturday.

By the time Van Persie turned on the edge of the area to arrow an unstoppable shot into the top corner in the 66th minute, United were well on their way to a routine victory.

Chris Smalling had scrambled them into an early lead, and any real doubt about the outcome disappeared when Wayne Rooney added a second before half-time.

As well as Van Persie's return to scoring form more than a month after his last Premier League goal, United could celebrate the return of fellow striker Radamel Falcao, who came off the bench to replace him after nearly six weeks out through injury.

That added a shine to three points that returned United to fourth place in the table only a few hours after Arsenal had moved above them.

While United are building momentum and confidence despite suffering another injury setback – Angel Di Maria limped off just before Smalling scored – the Tigers appear to be in freefall.

This was their fourth straight defeat, and they are now only out of the bottom three on goal difference and a point off the foot of the table.

Hull have managed only one league win since the opening day of the season, the same afternoon United last lost at Old Trafford.

Their home form was never convincing under David Moyes, but Van Gaal seems to have reintroduced the swagger and self-belief that was their trademark under Sir Alex Ferguson.

They were helped on Saturday by a Hull team that offered little ambition and limited resistance.

Tigers boss Steve Bruce has a miserable record against the club he played for, and a first win in 21 attempts against the Red Devils as a manager never looked likely.

The Tigers even assisted United with their first goal – goalkeeper Allan McGregor helping the ball over the line as he tried to keep out Smalling's prodded shot. Goalline technology confirmed it went in.

With Michael Carrick and Juan Mata dictating play and spraying passes in midfield, Di Maria's early exit, clutching the back of his thigh, did not make a difference.

United were dominating possession – they had 76% of the ball – and with Hull defending deep in their own half, more goals seemed just a matter of time.

Rooney all but secured the three points after 42 minutes when Van Persie teed him up to bend a low shot into the bottom corner from 25 yards.

Van Persie made sure of the victory midway through the second half, departing to a standing ovation when he was replaced by Falcao.

The Colombian looked set to mark his return with a goal but Michael Dawson's remarkable goalline clearance denied him from close range after Hull's defence was torn apart again.