Manuel Koranteng: Back on the highway to destruction – a red alert to wreckers of a blossoming union 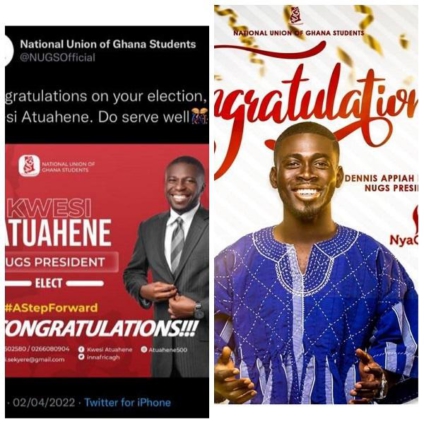 The past 24 hours have been truly nostalgic. It’s the 3rd National Union of Ghana Students (NUGS) Congress in the past four years.

Tinkaro-Gombilla found agreeable grounds to hand over their two-headed Union to Isaac Jay Hyde and his fellow executives. History remembers them for succeeding at what many had failed to do, for almost a decade.

It was to be the beginning of redemption for NUGS. And indeed it was. After serving for close to two years because of the Covid-19 pandemic, leadership of the Union was handed down to Emmanuel Boakye Yiadom, Julius Kwame Anthony and the rest of their colleagues in 2021.

The period after that has seen even a more significant boost in the relevance of the Union to the average Ghanaian student. Though bumpy at some points, Emmanuel YB, Julius Anthony and the other incumbent executives have built a useful foundation which is attracting people to NUGS. They are now beginning to feel it matters to their student life.

You can check on social media how people hail current executives of the Union for standing up to one authority or the other. That’s very good progress, considering where NUGS was, barely 5 years ago.

As they say, it is good to show up when you are around, but the real test of a leader is what happens in his absence. Will what s/he has built over the period stand the test of time?

Julius and YB and all leaders of what now looks clearly like a voyage into factions in the Union should know that, if this NUGS breaks up again, they will be held liable for it. If the Union gets tattered again, it will be in their name and they’ll forever be remembered as the ones who took it back to its dark days – the dark days when NUGS was muted and blacklisted by credible media houses because of factionalism, the days when NUGS had no representation on statutory government boards and committees, because it had two faces. And again, the dark days when student activism was at its lowest and student voices were missing from government policy interventions and considerations.

Both Kwesi Atuahene and Dennis Appiah Larbi who appear to be the new faces emerging, must be wary of becoming the pawns that are used to destroy the new NUGS and drag it back into the abyss of worthlessness.

The current NUGS has been the pivot around the organization and evacuation of stranded Ghanaian students from Ukraine. It was also at the center of the admission of the 499 students refused entry into the Ghana School of Law and has rejuvenated the base of student groupings that government now sees as a major stakeholder to engage in various means.

I can go on and on with several instances that the new NUGS has made students smile for one reason or the other in just the past few months.

In any case, both Julius and YB exemplify the reality that losing an election is not the end of a person’s life.

In 2019, Emmanuel Boakye Yiadom lost the NUGS presidential race to Isaac Jay Hyde. As a former Morning Show host on the University of Ghana’s Radio Univers, I remember interviewing a teary and utterly broken YB on the morning after the congress. His words; ‘if this is how they choose to repay me after all that I have done, I leave them to God. I will not be discouraged. I wish him [Jay Hyde] all the best’.

He clearly had issues with the process but he didn’t declare himself President. Much as I would have loved for him to challenge the results in a court of competent jurisdiction, he did not. And that was also okay. At the next Congress in 2021, YB was elected President.

If you still don’t get the point, look to Julius Anthony. He lost the SRC presidential race in 2019 at the University of Ghana. This was an election that had all credible polls tipping his victory with Kwaku Asante as the winning ticket. But he lost.

Today he is General Secretary of NUGS, representing an even larger congregation of students. I am not saying keep quiet when you disagree with the process. By all means, challenge a fraudulent system, but don’t do that by committing another fraud.

I really may not have to go into the details of this particular 2022 NUGS Congress at Ejisu, because it’s the same script with different characters.

But whether it is declaring yourself the winner before the process ends or it is hijacking the process so that all other voices won’t matter to the outcome, you have no respect and no means of making any real impact if the front breaks.

That’s the most certain prediction anyone with even half a brain can make. So hasten slowly. Two heads are indeed better than one, but there’s no NUGS if there are two heads on its neck.

The writer is a journalist with the Multimedia Group Limited’s JoyNews.