May Day: Mineworkers lauded for contribution to dev’t 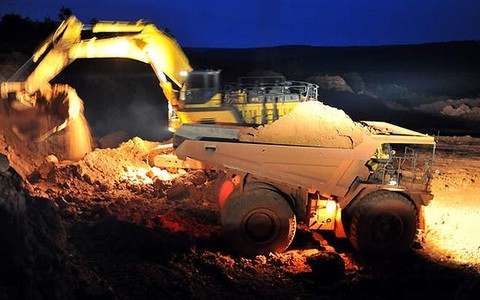 The Ghana Mineworkers Union (GMWU) has paid a glowing tribute of miners for contributing to the country’s economy.

The tribute, contained in a press release issued on Monday, comes ahead of the May Day celebrations on Wednesday.

“The uniqueness about this year’s May Day celebration is that it offers a special occasion to the members of the Ghana Mineworkers Union, GMWU, as they roll out a number of activities to mark the union’s 75th Anniversary.

“In a show of appreciation to the hardworking miners, members of the union will be hosted to a special get-to-gather with special anniversary souvenirs to be won in a raffle draw after the May Day parade on Wednesday. There will be varying anniversary souvenirs to be shared in addition to the raffle draw which will include items like laptops, tablets, air-conditioners, fridges, freezers and sound systems,” the statement issued by General Secretary, Prince William Ankrah, stated.

GHANAIAN MINEWORKERS COMMENDED FOR CONTRIBUTING TO COUNTRY’S DEVELOPMENT FOR THE PAST 75 YEARS AS MAY DAY IS OBSERVED ON WEDNESDAY.

Mine workers have for the past 75 years through sustained mining activities supported Ghana’s economic growth. It is in this regard that the leadership of the Ghana Mineworkers’ Union, GMWU, wishes to take the opportunity of this year’s May Day, which comes off on Wednesday to pay tribute to miners at the various mines who go down deep the bowels of the earth every day to find the rich mineral ore to keep the country’s economy going.

The uniqueness about this year’s May Day celebration is that it offers a special occasion to the members of the Ghana Mineworkers Union, GMWU, as they roll out a number of activities to mark the union’s 75th Anniversary. In a show of appreciation to the hardworking miners, members of the union will be hosted to a special get-to-gather with special anniversary souvenirs to be won in a raffle draw after the May Day parade on Wednesday. There will be varying anniversary souvenirs to be shared in addition to the raffle draw which will include items like laptops, tablets, air-conditioners, fridges, freezers and sound systems.

In order not to leave anyone out of May Day celebrations, there are discussions with Employers across the mining industry to organise some unique events at the various mine sites for those who are unable to attend the national May Day parade. This will ensure that all our valued members feel part of this important day in the history of the working class worldwide. It is gratifying to note that AngloGold Ashanti, Obuasi mine has bought into this idea and we hope Iduapriem mine and others will emulate. It is the expectation of the GMWU leadership that, when this becomes a feature across the entire industry, it will showcase the fact that May Day,is something that Employers also value and together with employees reflect on the sacrifices of people who fought for the institutionalisation of the eight hour work regime and improved working conditions.

It is indeed revealing that the union has established a wage model with key players in the industry such as Newmont Gold and AngloGold Ashanti. This is aimed at using productivity matrix and other macro-economic indicators as the scientific basis for an increase in salaries. It, therefore, reduces the hitherto protracted negotiations that characterise wage adjustment discussions the industry.

As a people-centred union, we the leadership and the entire membership of the Ghana Mineworkers Union, GMWU, have over the years raised concerns about the poor infrastructure in our mining towns. “After more than a century of mining in this country, we cannot continue to inflict this injustice on our mineral-rich communities which are major sources of foreign exchange earnings for the country.

On this day of workers solidarity, the leaders and members of the Ghana Mineworkers’ Union, GMWU, wish to advocate a Presidential Special Initiative by the government to fix the poor roads and other infrastructure in the mining areas. Demonstrations in such communities in recent times obviously show the frustration of the people and the need for urgent action to fix the yawning infrastructure gap.

The leadership of the GMWU recalled the President’s statement at a West Africa Mining and Power conference and Exhibition in 2018 in Accra, where he expressed anger at the infrastructure challenge in Ghana’s mining towns. It is on this note that the GMWU in its 2019 Pre-May Day news release is advocating a Presidential Special Initiative, PSI, to comprehensively accelerate the execution of major projects, especially, the road networks in the mining communities. Under the PSI, the government can as a matter of urgency make a special arrangement to encourage Public Private Partnership, PPP to address the infrastructure challenges in the mining towns. Advanced payment of royalties can be negotiated with mining companies with good balance sheet towards this initiative. Also, the Mineral Development Fund can be tailored in that direction.

“Adopting a Presidential Special Initiative, coupled with the needed political will and the right leadership, Ghanaians can be assured of unprecedented infrastructure development and many positive changes in the mining townships. We have lamented enough over the ugly infrastructure deficit in mining towns, let’s move beyond the talk.”

Another critical issue the GMWU would like the government to consider in any integrated plan for accelerating socio-economic progress in the mining areas is the establishment of buffer enterprises, to offer alternative employment opportunities to sustain the local economies. It is no secret that had it not been educational institutions, some mining communities can pass for ghost towns. This is no good image for a country which has enjoyed foreign exchange from mining for more than one hundred years.

Akwatia which was once an active mining town was a cash cow for the country, and not what it is today. One can imagine had it not been an educational institution like St. Roses SHS in the town what the situation would have been. The few years that AGA Obuasi mine was not operating the local economy was hard hit.

We, therefore, need a coherent plan that will outline plans for the mining sector and get the active involvement of the community and industry players. With Public Private Partnerships, PPP, we can sustain the local economies beyond mining and that is what our peers in California in the United States of America, Australians and South African have done.  So the gold rush logic to a large extent will be prevalent here as long as we do what is right.

Happy 2019 MAY DAY TO ALL GHANAIAN WORKERS, ESPECIALLY THE MINE WORKERS.

Issued by the General Secretary of the Ghana Mineworkers’ Union, GMWU