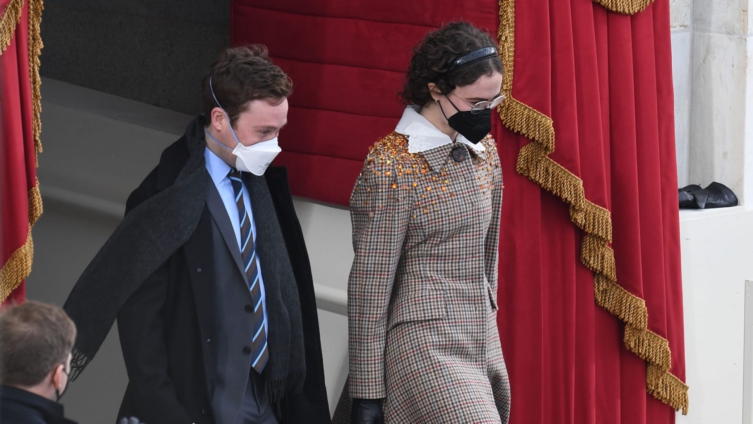 Standing out next to established style icons like Michelle Obama and Lady Gaga was always going to be a tough gig.

Her outfit — and her playful on-camera eyebrow dance — went instantly viral, leaving many excited about what the budding artist and design student might bring to the White House over the next four years.

Much of the buzz centered around her plaid houndstooth jacket. With its cinched waist, crisp white collar and sparkling embellishments, the wool piece won plaudits from the moment Emhoff walked down the steps of the Capitol alongside her brother, Cole.

“As an artsy teen, I feel the need to note how much Ella Emhoff’s representation means to us,” one widely-liked post read on Twitter.

Writer and editor Evan Ross Katz meanwhile commented: “The shoulder embellishments on Ella Emhoff’s coat? I smell a style icon in the making.”

Although Twitter users initially speculated that Emhoff, a student at New York’s prestigious Parsons School of Design, had created the calf-length garment herself, it was soon revealed to be the work of Italian label Miu Miu, a subsidiary of luxury giant Prada.

With the help of celebrity stylists Jill Lincoln and Jordan Johnson, she completed the look with John Lennon-style circular glasses, a black face mask, leather gloves and a headband by Loeffler Randall.

And while Emhoff’s outerwear garnered the most attention, praise was also reserved for the moiré dress she wore underneath.

Featuring a high neckline and puffed shoulders, the burgundy gown was designed by womenswear brand Batsheva, which prides itself on giving a “modern inflection” on traditional American styles and “elements symbolic of restraint and repression.”

Speaking about her choice of outfit prior to Wednesday’s inauguration, Emhoff told Vogue magazine that she had prepared her outfit expecting there to be “some anticipation” surrounding her — and her family’s — fashion choices.

“My mood board was very ‘little girl,’ in a sense, a lot of scalloped collars and big silhouette shoulders and small buttons,” she is quoted as saying in an interview alongside Batsheva’s founder, Batsheva Hay.

“I was going for something girlier, to embrace my feminine side … because, like, how many times do you prepare yourself to attend an inauguration? This momentous of an event deserves a momentous outfit.”

The daughter of America’s first Second Gentleman Doug Emhoff, her Instagram is filled with examples of her colorful knitwear and quirky personal style.

Prior to the inauguration, she was pictured alongside her siblings at the Capitol in a preppy look by Thom Browne. There, she paired an Oxford shirt and tie with a double-breasted coat by the New York designer, while her pleated red, white and blue skirt subtly alluded to the American flag.

DISCLAIMER: The Views, Comments, Opinions, Contributions and Statements made by Readers and Contributors on this platform do not necessarily represent the views or policy of Multimedia Group Limited.
Tags:
Ella Emhoff
Kamala Harris
US presidential inauguration