Meet the midwife driving a ‘Wooden Door Ambulance’ to save lives 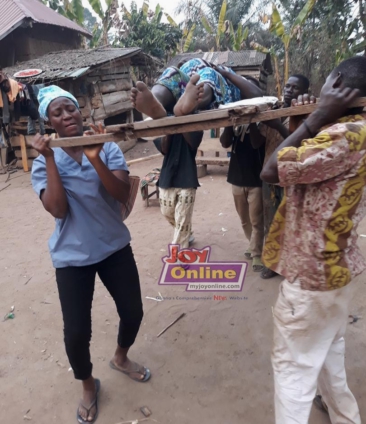 Many people, including health officials, have praised a 33-year-old midwife for her selflessness and commitment in saving the lives of pregnant women and their unborn babies in a hard-to-reach community in the Ashanti region.

Without access to an ambulance, Delali Gavor of the local Motokrodua Community Health Planning and Services (CHPS) Compound has improvised the use of wooden doors to transport expectant mothers to the health facility for deliveries.

I  travelled to the Motokrodua community to follow  up on the exploits of this extraordinary midwife who is using this simple tool to save lives.

Motokrodua is a small farming community noted for its cocoa production in the Sekyere East District of the Ashanti Region. It is one of the hard-to-reach areas in the district with thousands of hamlets scattered in the thickets of a forest.

Many of the settler farmers  here lack portable drinking water. They are plagued with many water-borne related diseases and other health conditions.

The area is endemic for Neglected Tropical Diseases such as Buruli Ulcer, Leprosy, Yaws and Elephantiasis, among others.

District Director of Health for Sekyere East, Justice Ofori-Amoah says reaching settler farmers in the   Motokrodua enclave  with healthcare is a difficult task.

“We have a lot of hard to reach areas, communities in the district. When you get to Motokrodua,  it’s a forest therefore we have a lot of these community members who live in the forest; in the hamlets. So you get to Community A, you will get about two or three people. You move to the next so getting them is not all that simple,” he said.

Some are delivered on their farms and others are transported to the Motokrodua CHPS Compound for attention by the only midwife here, Delali Gavor, and her team.

“Some of the cases we always attend to are snake bites, Scorpion stings, Malaria, diarrhoea, skin infections such as Scabies, Buruli Ulcer, Elephantiasis,” says Rosemary Delali Gavor, the nurse in charge of the local CHPS Compound.

According to her, residents who cannot afford healthcare  live in communities widely separated from the facility.

“We have communities such as Tetekaso, New Apaso, Ampaedwa, Addokrom, Dadease and the distance is far from where they are to the facility. What we normally do is we do home visiting,  get to the community we attend to some of them. The serious ones, we bring them to the facility to attend to them. Most of them don’t have Health Insurance,” she said.

Delali and her team were busy attending to clients when I caught up with her.

Lacking access to motorable roads, ambulance or other means of transportation for critical referral cases, Ms Gavor has improvised and resorted to the use of wooden doors to transport her clients.

“I went to the community with this man and this woman was so weak and was lying down,” she said.

She mentioned some complaints to me that she was feeling lower abdominal pains and dizziness. That’s why she was not able to walk.

After the assessment, I realized that she is having a high BP.  Then when I listened to the foetal heart rate, it was very low.

I did another assessment  and realized the water that the foetus was lying in was very green so it gave me a signal that this woman needs attention other than that, we can lose this baby.”

The thought of losing the woman and her unborn child brought the innovations in Ms. Delali.

“At that point in time, I was thinking about the life of the mother and the baby. I just wanted to save both lives,”  she said.

Two wooden slabs are joined with nails at the two ends of the door to support head pads.

Patients lie in a supine position on the door and are carried on the head with the help of three men.

This ingenuity has helped save many expectant mothers and their unborn babies.

“We all thought of finding a way. There’s no car, motorbike; no means of transport. The idea that came into my mind is that,  why don’t we make a wood structure so that we can convey this woman to the facility? The family agreed. We did the wood structure, we carried her till we got to the road side,” she said.

Zeeliya Yahaya, 20, who lives in one of the scattered hamlets near Tetekaso is among expectant mothers saved by the improvised wooden door ambulance.

She had declined seeing an untrained traditional birth attendant in a nearby hamlet until Delali arrived.

Thanks to the ingenuity of Delali, she safely delivered a bouncing baby girl.

“I was in labour on one Sunday morning so I informed my mother who called in a traditional birth attendant. I declined the service of the woman and insisted they send me to Motokorodua Clinic. I was afraid for my life and that of the baby. They later brought  Madam Dela,” she said.

She continued, “Since getting a vehicle to this place was difficult, she suggested they put me on a wooden door. First, she asked for slabs to be joined to the door so they carry me on the head. They will put me down on the cocoa farm, rest and continue again. Madam Dela, Elder Forkuo, Tido and my father were the ones who carried me on the head several kilometres to the clinic”.

The wooden ambulance has since saved many pregnant women and their unborn children, with the area recording zero maternal deaths.

As a practice, Delali has been visiting Zeeliya and her baby for counselling on post-natal health. But for Zeeliya, the wooden door has become part of her life-saving story.

She gazes at it almost every day, reminiscing.

“I’m becoming emotional,” he said upon touching the door. Seeing the door and what a door is made of and what it is meant for and eventually it has been used as something improvising to save a life of a woman who was in labour and saving the unborn foetus. I see this door to be symbolic and it should be served or be used as a tourist site or attraction.”

This is not the only good act of Delali.

She single-handedly led the production of hospital beds to complement the ones provided by the district assembly and also mobilized the community to fund the purchase of solar panels for the facility.

She has since become the toast of many, especially among her peers.

Delali was voted the Best nurse/midwife for Sekyere East District in 2019 and was recently selected by the Ghana Registered Nurses and Midwives to compete for the Best Nurse for 2019.

District Public Health Nurse, Mrs. Juliana Adu Mensah says Delali has made the district proud by  raising  the bar of nursing in the district.

” We know Dela to be a person who is hardworking so we were not surprised of her initiative  as well.

She has made the district proud and we the district we acknowledge that. We did that when we made her the best nurse. That was in 2019. So we are also proud of her.”

The situation at Motokrodua is a reflection of the challenges faced by health workers in the Sekyere East district in their quest to bring healthcare to the people.

The District Health Director has acknowledged the support of the Sekyere East District Assembly.

Justice Ofori-Amoah however wants public support in the provision of safety boots, water tanks, among others for Delali and her team.

“Where they sleep, some even share the wards with the clients. Even if you have money here, you can’t even go and hire any accommodation. The accommodation is not there,” he said.

DISCLAIMER: The Views, Comments, Opinions, Contributions and Statements made by Readers and Contributors on this platform do not necessarily represent the views or policy of Multimedia Group Limited.
Tags:
Maternal mortality
midwife
Sekyere East District