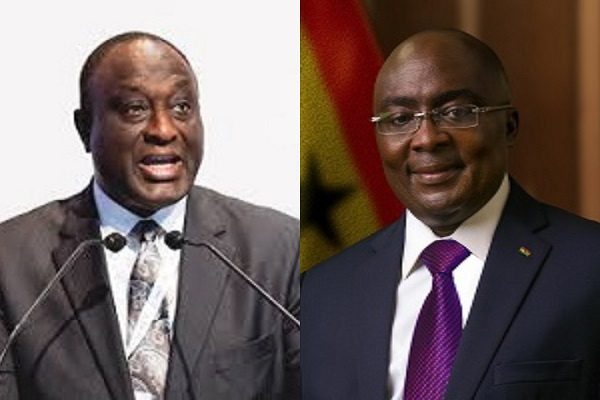 Members of a Pro-Alan group of the New Patriotic Party in the Northern Region has accused the Vice President, Dr. Mahamudu Bawumia of campaigning contrary to the party’s National Council directive.

The group said the Vice President is campaigning under the pretext of embarking on an official tour of the five regions of the north.

The Director of Administration for the Group, Moses Chebere at a Press Conference in Tamale alleged that the Vice President met with delegates of the party and instigated them against Akans.

He alleged that the Vice President told the delegates that he had been used by the party as a northerner to do “dirty Jobs” for the party, which Akans would not do.

According to Moses Chebere, “the actions of Dr. Bawumia is a deliberate attempt to court hatred for Akans and other non-northerners in the party.”

Mr. Chebere said the Vice President is on a tour to play on the emotions and sensibilities of the party’s delegates “using tribal bigotry.”

The Director of Administration of the Alan Group alleged that they are privy to some disturbing information on how the party intends to conduct its special voting.

He alleged that the Vice President’s team has planned some moves to let him win at all cost using the special voting. This, he said, has the potential of creating chaos in the party.

But in a rebuttal, Constituency Executives and Electoral Area Coordinators in the region have held a Press Conference to debunk the accusations by the Pro-Alan Group.

The Zogbeli Electoral Area Coordinator, Alhassan Inusah who addressed the media on behalf of the group said the supposed Alan Group peddled blatant lies about the Vice President.

He said the Constituency Officers have always met with the Vice President any time he is in the area since 2017 and his recent tour is no different.

The Area Coordinator said the meeting offered the Vice President a platform to educate their party folks on the achievements of the Nana-Addo-led government.

He said Dr. Bawumia never spoke about what the Alan Group attributed to him.

He noted that as part of the Vice President’s tour, he visited the Agenda 111 projects in Savelugu and Wulensi in the Northern Region.

He said, “Constituency Executives and Electoral Area Coordinators disassociate themselves from the Pro-Alan Group” and urged the public to disregard them.

DISCLAIMER: The Views, Comments, Opinions, Contributions and Statements made by Readers and Contributors on this platform do not necessarily represent the views or policy of Multimedia Group Limited.
Tags:
Alan Kyeremanten
Bawumia
Northern region
NPP